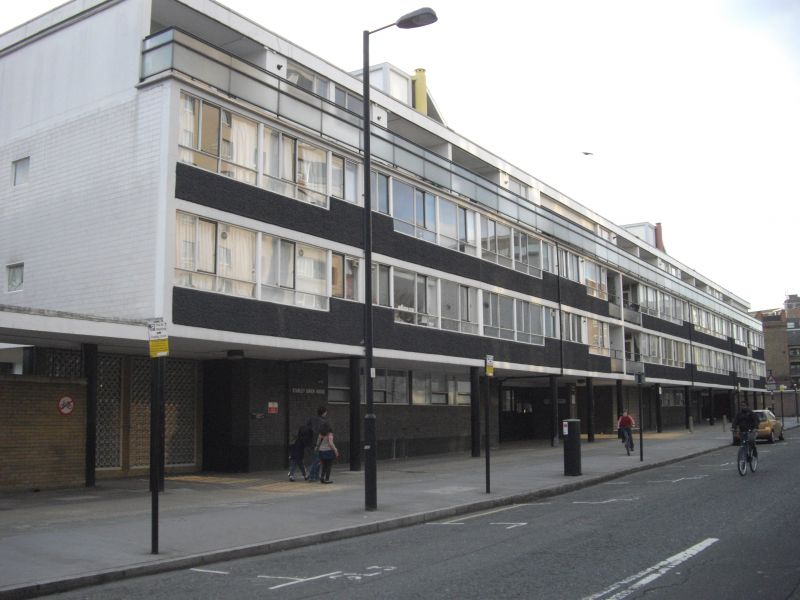 Reinforced concrete frame, with pink brick basement and ground floor with some golden yellow opaque glass cladding facing garden, grey engineering brick to Golden Lane, shuttered concrete end walls, painted pick-hammered upper floors -originally black and white but now a uniform shade. Flat roofs. Screen wall canopy on painted concrete posts extends the length of Golden Lane to east, continues beyond block with later open ceramic screen also used to infill two openings under block and at northe~n end. Southern end broader, with later tiled back, incorporates three-dimensional map of the estate on wall. Stanley Cohen links Bowater House, Bayer House and Basterfleld House. Four storeys, the upper floor set back, the block kept low to allow a maximum of early morning light into the estate. Flats 1-5 reached via stairs at southern end of block. Nos. 6-12 and 25-32 reached off shared stair with Nos. 20-29 and 40-49 Bayer House, on south of entrance to estate. To north of this, smaller stair leads to flats 13-17, and similar stairs serve flats 18-22. At north end of block stair to flats 23-24, 25-32 reached off stairwell shared with Nos. 20-37 -and 40-57 Basterfield House. Eight one-room flats, eight two-room flats, fourteen three-room flats and two four-room flats. The smallest flats on ground and third floors, which have balconies with steel and mahogany handrails. Nos. 25-32 on top floor reached via access "gallery, the rest from stairs. All w1ndows have metal opening lights in timber surrounds. Stairs of concrete with open steel balustrades in open wells. The interiors of the flats not of special interest.

HISTORY AND ANALYSIS
The development of the Golden Lane Estate is explained in the entry for Great Arthur House.