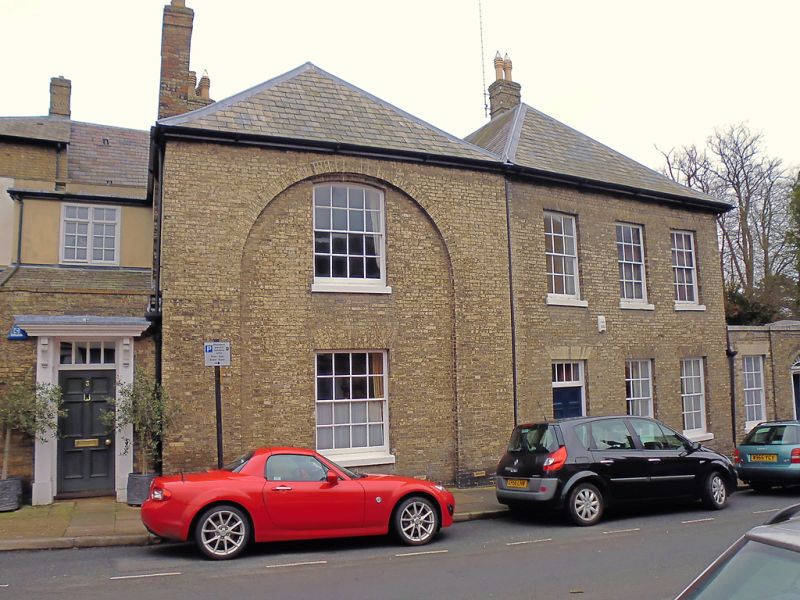 House, now 2 dwellings, thought to be on part of the site of
the song school buildings of the Abbey and built straddling
part of the Precinct wall. C17 and C18 with early C19 front
and later C19 additions. White brick to front and sides;
random flint and red brick to rear; mock timbering to rear
wing; slate roofs, hipped at the front, in 2 parallel ranges.
EXTERIOR: 2 storeys, cellars and attics; complex form. 4
window range to Honey Hill: all 12-pane sashes in shallow
reveals with flat gauged arches. On the west, the single
window on each storey is set within a high shallow
semicircular arched brick recess. A central 6-panel door with
a rectangular fanlight and gauged flat arch. A flat-roofed
extension on the west of the front has a single 16-pane sash
on the ground storey but is mainly occupied now by a garage
with double doors. On the east, a single-storey extension with
a parapeted front wall: this has a 12-pane sash window and a
recessed 6-panel door in a surround with plain Doric columns.
A segmental fanlight with radiating glazing bars is set within
a segmental brick arch. The east side has a 6-window range of
12-pane sashes in shallow reveals with flat gauged arches.
The rear range overlaps the front on the west and has
irregularly set 16-pane sash windows in flush cased frames
with segmental-arched heads, 2 on the ground storey with very
heavy ovolo-moulded glazing bars. 3 half dormers have sash
windows with a single vertical glazing bar and shaped
bargeboards above rendered apexes. The late C19 wing on the
north-east has ornate applied mock timbering and fluted
bargeboards, 3 narrow gable-end windows and a tiled roof.
INTERIOR: in the central section of the house the remains of a
thick dividing wall of rubble flint between the front and rear
rooms is a fragmentary part of the Precinct wall: this also
extends northwards for several metres at the rear of the
house. The back range of the house is the oldest part, with
fragments of C17 timbering. Documentary evidence suggests that
most of the building was in existence by 1702, but interior
features are mainly C18 or early C19. The principal ground and
1st storey rooms have ornate plaster cornices and 6-panel
doors.
One large upper room has a good plaster centrepiece to the
ceiling and an Adam style fireplace: fluted Ionic pilasters

and an architrave with a carved urn on a central tablet. A
panelled interior to the late C19 wing on the north-east.
(Statham M: Yesterday's Town: Bury St Edmunds: South Midlands:
1992-: 78).