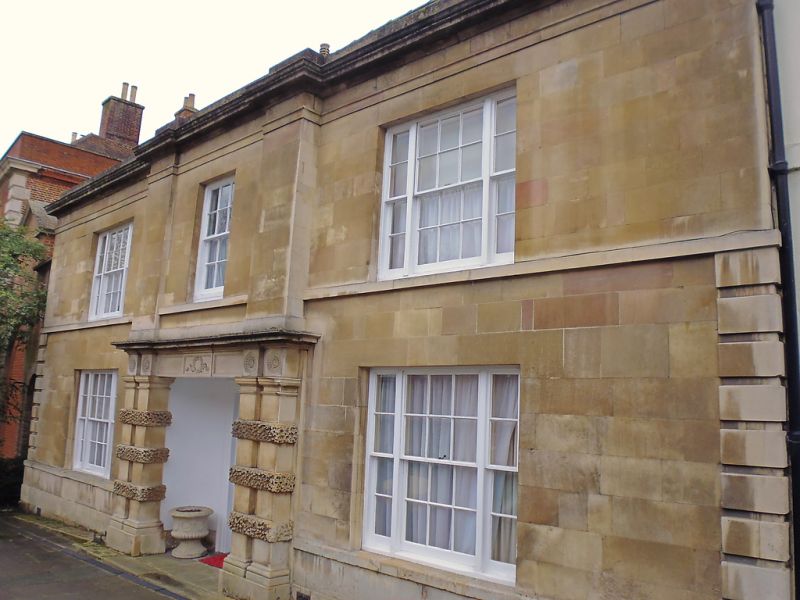 House. C18 front; C15 core. Timber-framed; C18 ashlar to the
Honey Hill frontage; rear range faced in red brick and stone;
slate roof.
EXTERIOR: 2 storeys and attics to front range, 2 storeys to
the long rear wing. The ashlar front, with a stone parapet,
cornice and plinth with splayed top, was added during the
ownership of Thomas Singleton, the stone mason responsible for
building the Town Hall, Cornhill (qv). Rusticated quoins. 3
window range: the 2 outer windows on each storey are
tripartite, with 12-pane central lights. The centre breaks
forward, with plain pilasters to the 1st storey enclosing a
12-pane sash window above the entrance. A raised stone band
runs below the windows on each storey. A recessed 6-panel door
with raised fielded panels is in a wide entrance porch with
paired pilasters banded with vermiculated rustications, a
frieze ornamented with paterae and a cornice. The rear wing is
faced with late C17 red brick on the west side with a plain
cornice. 3-light casement windows with segmental-arched heads
have square-leaded panes.
INTERIOR: the C15 front range had a 2-cell plan with a jettied
service-room to the left of a central cross-entry, now
underbuilt, and a one-and-a-half bay open hall, now
fragmentary, to the right. The original building, with its
continuous roofline, may well have been of Wealden form,
though conclusive evidence is lacking. The partition at the
lower end of the former open hall is now concealed above the
present cross-entry, realigned in the C18. It has a richly
moulded and embattled spere beam, with evidence for braced
spere posts, and supports close-studding up to the ridge of
the roof. The mouldings continue along the middle rail on the
rear wall as far as the open truss, which is of arched-braced
collar form, but fragmentary.
In the rear wall, the main post of the truss has a polygonal
buttress shaft with a moulded capital at the springing of a
steep arched brace. The collar-purlin is clasped between an
upper and lower collars. The timbers are not smoke-blackened,
but have traces of late C16/early C17 colouring in red and
white.
Slight remains of an early C16 inserted floor over the hall

with moulded joists and a truncated main beam. This range of
the house had major alterations by Thomas Singleton (d.1792)
in the later C18: most of the earlier evidence was exposed
during recent restoration work and is no longer visible. An
early C18 dog-leg stair with turned balusters links the front
and rear ranges of the house.
The rear range is in 4 bays, 2 originally storied and 2
containing an open hall whose initial function may have been
industrial rather than domestic. The roof is smoke-blackened
with a tall plain rough crown-post braced to the collar-purlin
with small solid braces. Widely-spaced studding in the gable.
The 2 storeyed bays have massive plain joists and an
unblackened roof of crown-post type. On the 1st storey there
was formerly a partition between these 2 bay