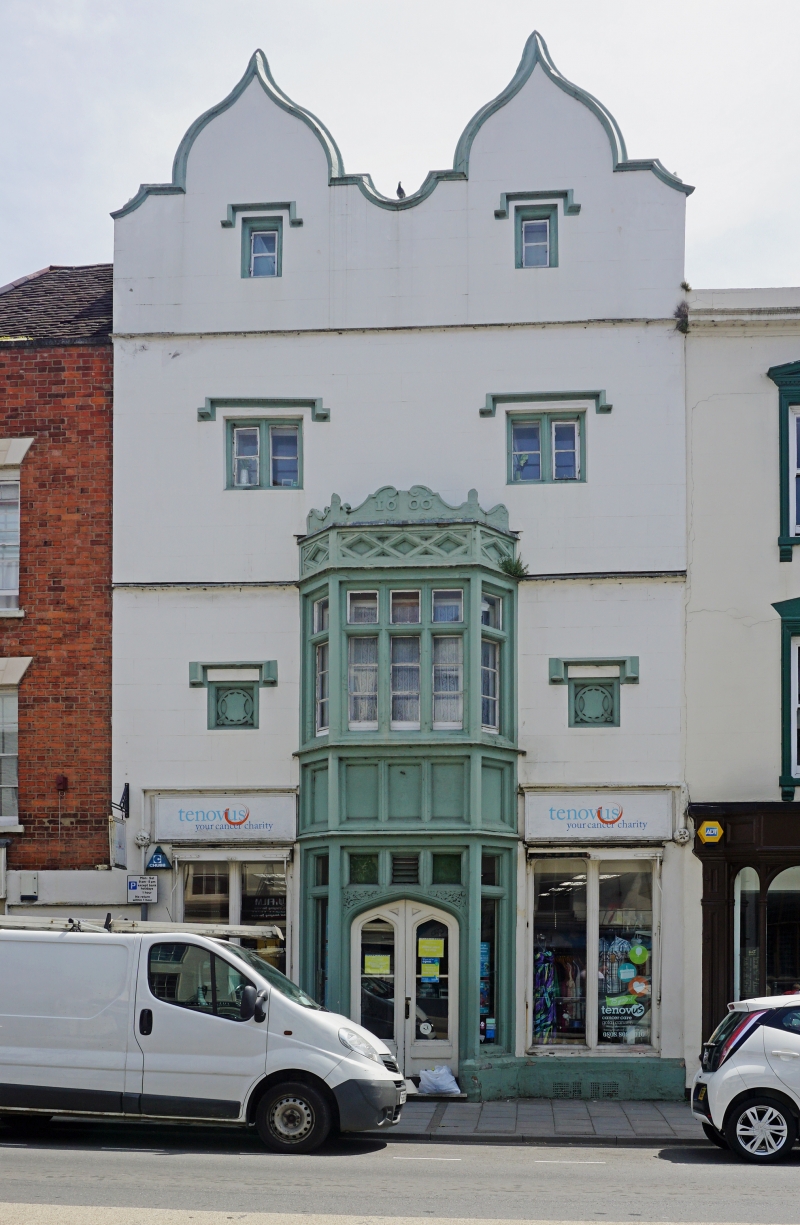 House in row, with several occupations, and shop. Dated 1606,
but rebuilt and extended c1845. Rendered facade, brick with
stone dressings the remainder, tile roof, brick stacks.
PLAN: A tall front with twin 'Dutch' gables, with a long
extension at the back; access is through an early doorway in
the ground floor of No.123 (qv), and a substantial porch, part
of the mid C19 extensions, closes the courtyard beyond this
throughway. c1845 front in Domestic Tudor style.
EXTERIOR: 4 storeys and basement, 2-windowed. All the windows
are small casements with horizontal bars, with stone
ovolo-mould surrounds, mullions and transoms and moulded
stopped drip-courses. In the gables a small single light, and
at second floor small 2-lights. At first floor there are 2
recessed square panels with raised shields, flanking a canted
bow, in 1:3:1-lights with transom, under a frieze with diamond
recessed panels and decorative cresting containing the date
1606. Below the moulded cill panelled breastwork links with
the plain fascia contained in a raised mould.
The ground floor has a central canted doorway below the bay,
with 4-centred arch over a pair of C19 glazed doors with
arched heads; the returns have lofty side-lights with a
transom, and to each side is a tall 2-light display window.
All is set to a plinth, and there are simple string courses at
first and second floor levels. The high shaped gables have
moulded saddle-back copings; the parapets return each side.
There is a large C17 brick stack on the left party wall.
To the left, under No.123 (qv), is a fine wide early C17
studded plank door in a flat 4-centred moulded head and frame
stopped to the plinth. The stone paved throughway and court is
closed by a transverse full-width gabled porch in brick with
stone dressings, with an arched doorway and sidleights.
The main wing is on 3 floors, with a variety of
stone-mullioned casement windows, and a one-storey bay window
with stone hipped roof. A doorway formerly gave access to the
ground floor of the front block. Beyond the porch is an
external stack carried on a moulded stone corbel at first
floor level.
INTERIOR of the rebuilt older section was not accessible, but
the previous list refers to 'some panelling'. The ground floor
has been opened into one full-depth space, but had 2 cross
walls to an entrance lobby from the side door; these are now
opened with wide elliptical arches. The front room had a
fireplace, now blocked, and retains the show-cases flanking
the High Street entrance, part of the 1845 design for the shop
front. The rear space retains a continuous cornice and frieze.
All this is work of the C19 reconstruction.
A winder stair with brick treads and timber nosings, to the
right, gives to the basement, which has 2 very wide chamfered
and stopped beams, presumably of 1606. The front and rear
brick walls contain a series of broad Gothick arched recesses,
and on the N wall is a deep recess, probably a former chimney
breast. The rear porch has a fine Minton tile geometrical
floor pattern. In the rear wing is a richly detailed open-well
oak staircase rising through both floors.