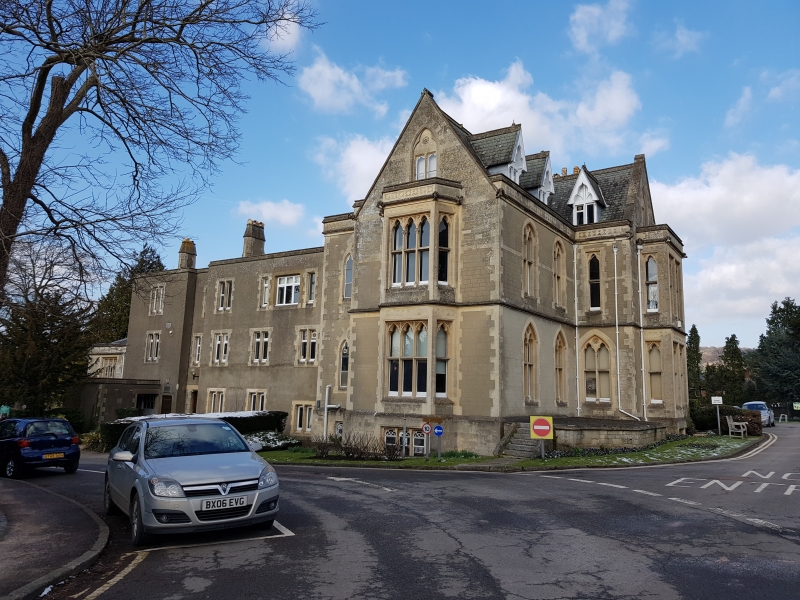 MATERIALS: the house is constructed of stone and cement rendering with ashlar dressings and has a slate roof (partly Westmorland and partly Welsh) with tall clustered stone chimneystacks. At least part of the building has cavity walls. The windows are mainly stone mullioned and transomed casements and some windows retain decorative cast iron work, probably from family owned ironworks.

PLAN: the building is asymmetrical and roughly L-shaped with principal rooms aligned north-east to south-west, billliard/ballroom to north-west and service wing to the west. The house ranges from one storey with semi-basement to the north-west billiard/ballroom room, to two storeys and semi-basement to the north-east, to two storeys basement and attic to the south-west and three storeys to the western service range.

EXTERIOR: the south-east or entrance front is of seven bays comprising a higher section of three-bays and two-storeys and attics over basement to the west and a lower section of four-bays and two-storeys over basement section to the east. The western section has a decorative cornice of stone lozenges, moulded string-course and plinth. The third bay from the south-west projects with a gable and with a further projecting square bay from the second floor downwards; this contains paired two-light trefoil headed windows separated by slender shafts with small capitals to the first floor, with plain shafts to the ground floor and decorated spandrels above each window head. The other two-bays have paired trefoil windows under a cambered arch to the first floor and under a pointed arch to the ground floor. An empty plinth in front of the ground floor windows once supported a conservatory. The eastern section is recessed with a moulded cornice. Three windows are of two lights with trefoil heads under pointed arches with carved paterae. The main entrance is situated in the eastern bay. Four stone steps lead to a pro-style porch with a moulded trefoil arch supported by slender columns, with corner buttresses and two pierced quatrefoils over enclosing heraldic shields. The parapet above has pierced trefoil arches. Further east a fourth window bay projects with a three-light window with flat cusped heads.

The north-east side has two unequally-sized full-height canted bay windows, each containing three mullioned and transomed windows with Caernarvon arches. The basement windows have decorative ironwork.

The north-west elevation has a further five similar windows, the eastern pair projecting in a square bay and a western projecting gable with two pointed arched windows to the main staircase on the first floor. The western half of this front has been partly obscured by the single storey billiard/ballroom over a ground floor which overlays the plinth and part of a ground floor window surround.

The billiard/ballroom is of three bays in width and six bays in depth with windows of two-lights with trefoil heads separated by columns, each with a pierced quatrefoil over, set in pointed arches, each window bay flanked by buttresses.

The south-west elevation is divided into two sections, the southern section containing principal rooms, the northern part comprising the former service wing. The southern part is of two-bays and has a large gable with canted bay to the lower floors. The ground and first floors have five-light trefoil-headed windows, a moulded stringcourse and carved waterspouts. The recessed bay to the north has a paired trefoil-headed window. The service wing to the north is much plainer and is of five-bays with flat-arched windows, including a C20 window on the second floor and has a C20 flat-roofed porch.

INTERIOR: entrance from the south-east porch, which has a coffered wooden ceiling and an elaborate door with trefoil and quatrefoil glazed panels strengthened by ornamental scrolled ironwork, leads into a hall. This has a moulded cornice, arched entrance, elaborate linen-fold pattern carved window shutters and doors and an elaborate white marble fireplace with black marble half-columns, a band of ceramic tiles and cast iron fire-grate. The south-eastern corner room retains original window shutters, an octagonal ceiling rose and an elaborate marble fireplace with Caernarvon arch, black marble columns and ceramic tiles. To the north are two inter-connecting reception rooms with square ceiling roses, ornamental cornices and elaborate white marble fireplaces. A Caernarvon-arched entrance in the western room leads into a small vestibule with a painted and carved pointed arch and a ceiling with a painted decoration of Tudor roses leading into the billiard/ballroom. This is five-bays long by three-bays wide and has a roof structure with carved tie beams and arched braces supported on elaborate stone corbels. The roof is coffered with painted panels depicting a starry firmament and also has painted panels of exotic beasts and improving texts. At the south-east end are three arched entrances, the central one higher and wider than the others and with granite columns. All have carved and painted decoration and elaborate panelled doors with foliate decoration. Above these arches is an ornamental cast iron ventilation grille. The penultimate room to the south-west, possibly a morning room, has a square moulded ceiling rose and a painted ceiling divided into twenty four panels with geometric motifs and improving texts. There is also a moulded cornice, linen-fold wall panelling and an elaborate white marble fireplace with half-columns, ceramic tiles and cast iron firegrate. The adjoining south-western end room has an octagonal ceiling rose and a painted ceiling with motifs incorporating the initials W H F (for William Henry Forman) and the Welsh dragon. There is also an elaborate moulded cornice, original window shutters and an elaborate white marble fireplace. The main staircase is a well staircase with a mahogany handrail and cast iron balusters and the arched ceiling is ribbed and boarded with quatrefoil motifs. The staircase window has cast iron decoration. Paired arched entrances on the first floor divided by composite columns have a painted decoration on the wall above of a stylised oak tree with a heraldic shield and motto. The south-western bedroom retains a moulded octagonal ceiling rose, moulded cornice, original window shutters and an elaborate white marble fireplace with Caernarvon arch, black marble half-columns and ceramic tiled lining. The adjoining bedroom also retains a moulded cornice, window shutters and a white marble fireplace. Two further bedrooms retain a small marble fireplaces with tiled surround and iron firegrates. Another room has a marble fireplace with paterae, pilasters and cast iron firegrate. Two other marble fireplaces have been blocked but may retain similar firegrates or tiling. The service wing contains a service staircase with turned balusters.

A house on the site was built in the 1750s by William Page and later occupied by William Crawford MP. In 1849 Thomas Seaton Forman (1791-1850), of the Forman south Wales ironworks family, bought Pippbrook House but died without issue in Pisa, Italy, on an art and antique collecting trip the following year. As a result his unmarried brother, William Henry Forman (1794-1869), concentrated most of the family wealth in his hands and engaged George Gilbert Scott to rebuild and extend Pippbrook House in 1856. W H Forman was also a great collector of antiques and a private museum was built within the house. An auction was held of his collection in 1899 and paintings from the collection are held by Tate Britain and bronzes by the Metropolitan Museum of Art in New York.

The house is shown to its full current extent on the First Edition 25 inch Ordnance Survey sheet of 1870, and is named Pippbrook House. However, it would appear that although the north-west billiard room or ballroom is shown on the 1870 map it was probably added a few years later than the rest of the building because it obscures a projecting gable containing the main staircase window on the rear elevation and abuts a ground and first floor window on the rear elevation. No change is registered on the 1896 edition map. On the third edition map of 1914, the south-west corner of the building is hatched suggesting the presence of a conservatory.

By the end of the 1920s the property was in the ownership of Dorking Urban District. Although the shape of the building had not altered by the Fourth Edition Ordnance Survey map the property was now called Pippbrook and there were tennis courts in the grounds. Until 2012 it housed the town library.

Sir George Gilbert Scott (1811-1878) was a most prolific architect. Soon after his death 'The Builder' published a list of 732 buildings or projects, but this was not reckoned a definitive list. Of these the majority were ecclesiastical commissions but he also designed a number of very important secular buildings, for example the Albert Memorial and the Midland Grand Hotel at St Pancras. He was awarded the RIBA Royal Gold Medal in 1859 and was knighted in 1872. Most of his domestic buildings were either vicarages or almshouses. Scott's most significant large houses were Kelham Hall, near Newark-on-Trent (1858-61) built for J H Manners Sutton (Grade I), Walton Hall, Warwickshire (1858-20) for Sir Charles Mordaunt (Grade II*) and Brownsover Hall, Warwickshire of circa 1870 (Grade II*).

Pippbrook House, a Gothic style country house designed in 1856 by Sir George Gilbert Scott for William Henry Forman, is listed at Grade II* for the following principal reasons:
* Outstanding decorative elements: the principal rooms, built for entertainment and to display an art collection, retain the complete mid-C19 decorative scheme including fine quality joinery, elaborate moulded plastered cornices and ceiling roses, carved marble and stone fireplaces with Minton tiles and cast iron firegrates and painted decoration to the ceilings or walls of five rooms;
* Historic interest: built for William Henry Forman, owner of south Wales ironworks. His connection with the house is shown by the use of ironwork in the building and the use of his initials, crest and the Welsh dragon as decorative motifs.