A Grade I Listed Building in Horncliffe, Northumberland 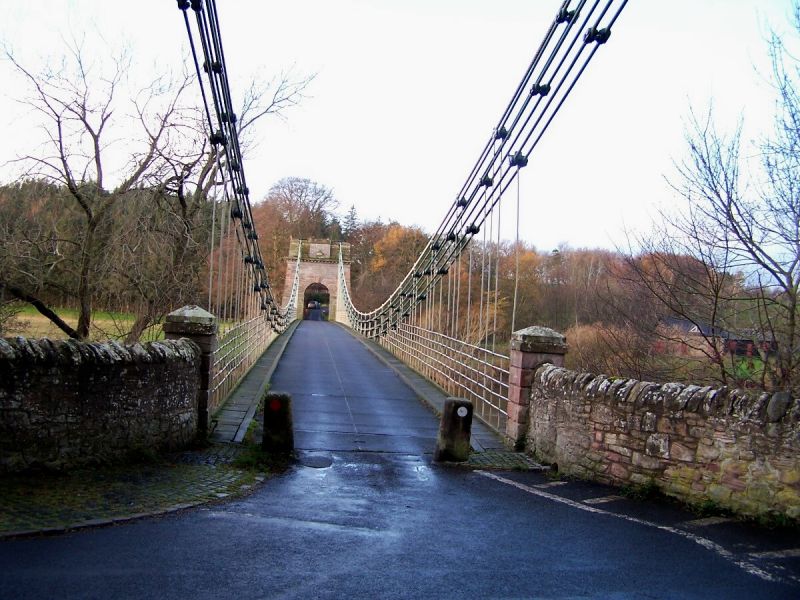 On the west (Scottish) side, tall battered, rusticated pier of pink sandstone with keystoned round arch for the roadway, bold dentilled cornice and high blocking course carrying the cables. In the blocking course an iron inscription VIS UNITA FORTIOR 1820, (‘United Strength is Stronger’) with intertwined roses and thistles. The pier at the English end is built into the cliff. Also of pink sandstone, it has similar rustication and 2 stages. The lower stage contains an pilastered doorway with modillion cornice surrounding a bronze memorial plaque of 1902; this stage has a modillion cornice. Battered upper stage has dentilled cornice and a high blocking course bearing a similar iron inscription and intertwined roses and thistles as the pier on the west side.

The Union Suspension Bridge was erected on behalf of the Berwick and North Durham Turnpike Trust and opened on 26 July 1820. Spanning the River Tweed (the county and national boundary between Scotland and England), it was the first road suspension bridge in Britain and is the oldest still in use as such. For six years it had the longest span in the world, equal to a rope bridge in Tibet, until surpassed by the Menai Bridge. Technological innovation enabled suspension bridges to span large widths at a fraction of the cost of their masonry equivalents; the Union Bridge being 368ft long, 18ft wide, 27ft above the water and having cost approximately 7500 pounds to erect, rather than the anticipated £20,000 for a stone bridge. Captain Samuel Brown's bar links (patented by him in 1817) were used here for the first time. In 1902-3 the upper wire cables were added in case of a failure in the main chains and further suspenders added to the steel reinforcement at the sides of the timber deck. The deck was renewed in 1871 and again in 1974.

Captain Samuel Brown (1776-1851) joined the Royal Navy in 1795. Following the Napoleonic Wars, he formed a partnership with his cousin Samuel Lennox to manufacture anchor cable made from chain for use on naval vessels. Previously cables were made from hemp. His successful designs and the patents he took out on them meant he was soon the Admiralty's sole supplier of chain anchor cables. Beside his work for vessels, Brown also supplied the chainwork for approximately forty piers and suspension bridges. Brighton Chain Pier (1823) is a well-known example of the former and the Union Suspension Bridge being amongst the best examples of the latter.

The ‘Union Suspension Bridge (That Part In Scotland)' is also listed as a category A building in the Scottish Borders. It was formerly a scheduled monument and was de-scheduled 20 December 1999.

The Union Suspension Bridge of 1819-20 by Captain Samuel Brown is listed at Grade I for the following principal reasons:
* Date: as a an early C19 suspension bridge, the structure sits in the period when there is a presumption in favour of listing;
*Technological Innovation: the bridge was the first road suspension bridge in Britain and, when built, the longest span in the world. The new suspension bridge technology pioneered here allowed bridges to span large widths at a fraction of the cost of more traditional construction techniques.