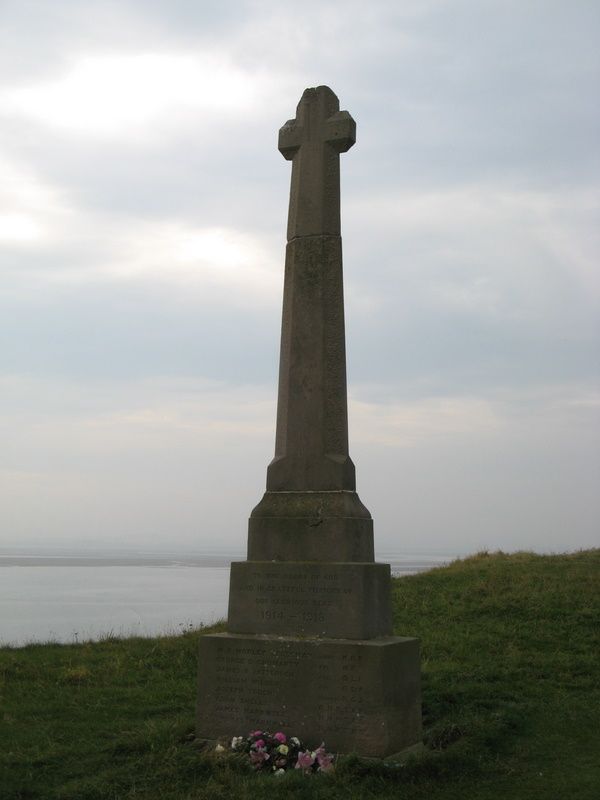 DESCRIPTION: The memorial comprises the war cross design by Sir Edwin Lutyens, a slender tapering cross c5m tall. The lozenge-sectioned shaft and short cross arms are linked to the base by stop chamfers and cyma moulding. The shaft rises from a three-stage base standing on a low, circular, step.

The memorial stands on The Heugh, to the south of the ruins of Lindisfarne Priory and overlooking Lindisfarne Castle and the harbour, with the Farne Islands in the distance to the east.

This List entry has been amended to add the source for War Memorials Online. This source was not used in the compilation of this List entry but is added here as a guide for further reading, 8 February 2017.

The great wave of memorial building after the First World War resulted in thousands of commemorative monuments being raised both at home and on the battlefield. Sir Edwin Landseer Lutyens was the most outstanding designer to work in this field. This is one of 15 War Crosses designed by Lutyens, sharing a broadly similar design. The earliest to be erected was at Miserden, Gloucestershire, in 1920; the latest at Station Road, York, in 1925.

In 1902, Lutyens had been commissioned by Edward Hudson to convert the C16 Lindisfarne Castle into a residential property. It is assumed that the commission for the war memorial arose because of the work that Lutyens had undertaken for Hudson. Lutyens donated his services to the War Memorial Committee. The memorial was carved in Doddington stone by Mr Tully of Belford; Lutyens chose this stone to chime with the stone of Lindisfarne Priory. At a well-attended ecumenical service, on 4 June 1922, the memorial was unveiled by Major Morley Crossman DSO and dedicated by Rev WB Hall.

An inscription to commemorate those local servicemen who died fighting during the Second World War was added at a later date. Following storm damage which broke the shaft in the winter of 1983-4, the top of the memorial was replaced.

Sir Edwin Lutyens OM RA (1869-1944) was the leading English architect of his generation. Before the First World War his reputation rested on his country houses and his work at New Delhi, but during and after the war he became the pre-eminent architect for war memorials in England, France and the British Empire. While the Cenotaph in Whitehall (London) had the most influence on other war memorials, the Thiepval Arch was the most influential on other forms of architecture. He designed the Stone of Remembrance which was placed in all Imperial War Graves Commission cemeteries and some cemeteries in England, including some with which he was not otherwise associated.

Holy Island War Memorial, situated on The Heugh, is listed at Grade II* for the following principal reasons:
* Historic interest: as an eloquent witness to the tragic impacts of world events on this community, and the sacrifices it made in the conflicts of the C20;
* Architect: by the nationally renowned architect Sir Edwin Landseer Lutyens (1869-1944), who designed 58 memorials at home and abroad including the Cenotaph in Whitehall;
* Design quality: a simple yet elegant cross;
* Group value: adjacent to the scheduled remains of Lindisfarne Priory and positioned within sight of Lindisfarne Castle (listed Grade I), which was converted to a house in 1902 by Lutyens for Edward Hudson with its registered garden (Grade II) designed by Lutyens and Gertrude Jekyll.