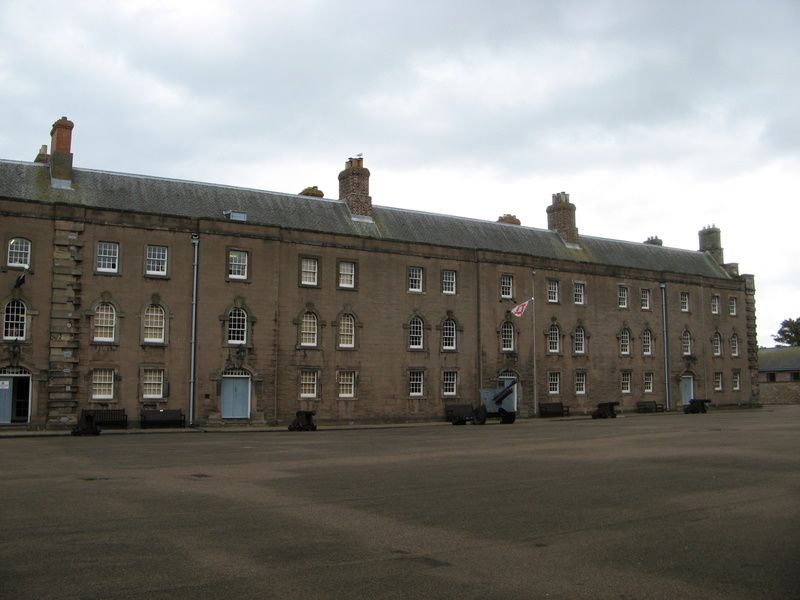 Barrack and officers' block, now museum. 1721, probably by Nicholas Hawksmoor, for the Board of Ordnance. Sandstone ashlar, later render to the front, with brick axial stacks, and slate valley roof. Vernacular Baroque style.
PLAN: double-depth plan with officers' section to N end, forn1ing E side of parade ground quadrangle.
EXTERIOR: 3 storeys and attic; 16:4-window range. A near symmetrical range, with left-hand end section set forward, blocked quoins to stepped gables, the single bay to the right of the end range defined by a blocked pilaster strip, entrance bays to the centre and 3 from each end of the main range: broken forward, with a thin cornice and parapet. Segmental-arched doorways with imposts and tall keys, small-paned fanlights and double boarded doors; ashlar Surrounds to ground- and second-floor flat-arched 8/8-pane sashes, and first-floor round-arched sashes with key and imposts; the 5 accentuated right-hand bays have segmental-arched first-floor windows, as do those to the matching rear elevation. Left-hand gable onto the Parade has 3 segmental-arched ground-floor windows and 1 smaller right-hand one, single first-floor round-arched and second-floor segmental-arched windows, with 8/8-pane sashes, t11e 2 right-hand ground-floor windows have C20 horned sashes; 2 boarded oculi in the stepped gables.
INTERIOR: axial fireplaces in heated back-to-back barrack rooms, divided by a spine wall, with stair flights from the entrances with uncut strings and 2 rails. Former officers' section has stair with column balusters and square newels and moulded rail, first-floor axial corridor and fireplaces with fluted surrounds.
HISTORY: part of the earliest planned barrack complex in England, pre-dating most English barracks by nearly 80 years, because of the need for a permanent garrison on the Scottish border. This plan is typical of barracks in the C17 and early C18. One of a number of Ordnance buildings associated with Hawksmoor and Vanbrugh.