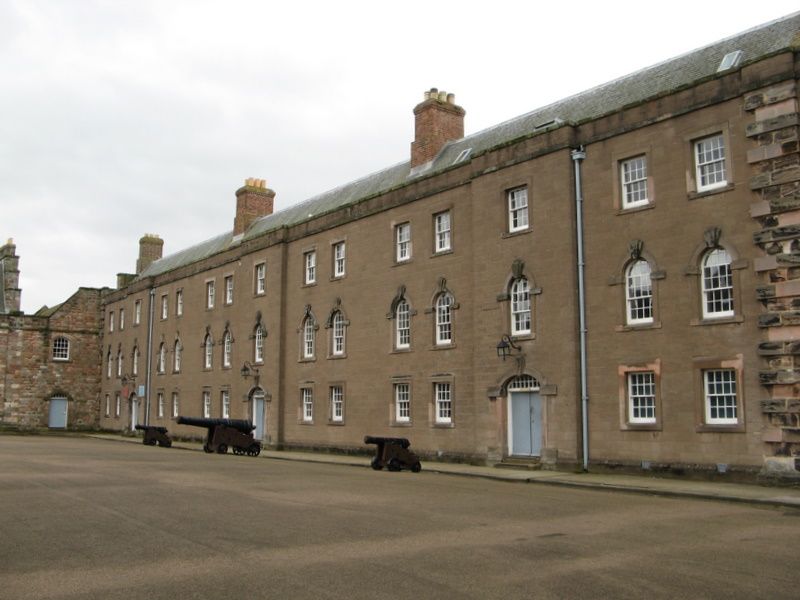 Barrack and officers' block. 1719-21, probably by Nicholas Hawksmoor, for the Board of Ordnance. Sandstone ashlar, rendered to the front, with brick axial stacks, and slate valley roof Vernacular Baroque style. Double-depth plan with N officers' section.
EXTERIOR: 3 storeys and attic; 16:4-window range. A near Symmetrical range, with right-hand end section set forward, blocked quoins to stepped gables, the single bar to the left of the end range defined by a blocked pilaster strip, entrance bays to the centre and 3 from each end of the main range broken forward, with a thin cornice and parapet. Segmental-arched doorways with imposts and tall keys, small-paned fanlights and double boarded doors; ashlar Surrounds to, ground- and second-floor flat-arched 8/8-pane sashes, and first-floor round-arched sashes with key and imposts; the 5 accentuated right-hand bays have segmental-arched first-floor windows, as do those to the rear elevation, which has 3 C20 service blocks attached. Right-hand gable onto the Parade has segmental-archedg1-ound-floor horned 2/2-pane sashes, and single first-floor round-arched and second-floor segmental-arched 8/8-panesashes, with boarded oculi in the stepped gables.
INTERIOR: heated back-to-back barrack rooms, divided by a spine wall, with stair flights from the entrances with Uncut string and 2 rails; officers' rooms in the end are separated by an axial corridor with stair with column newels and stick balusters.
SUBSIDIARY FEATURES: attached parallel rear rubble wall with interval piers encloses rear yard, and extends approximately 80m from the NW corner S to meet the officers' mess (qv),
HISTORY: part of the earliest planned barrack complex in England, pre-dating most other English barracks by nearly 80 years, because of the need for a permanent garrison near the Scottish border. This plan is typical of the C17 and early C18. One of a group of Ordnance buildings from this period associated with Hawksmoor and Vanbrugh.