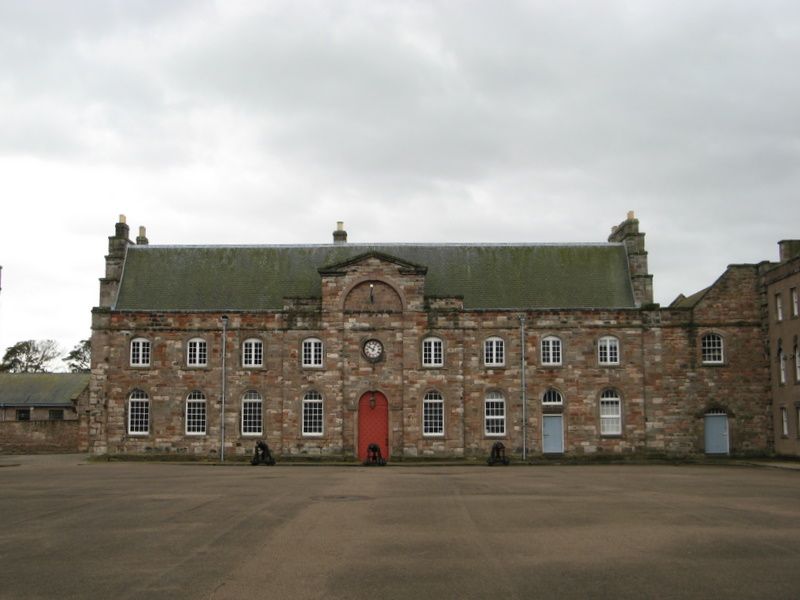 Barracks store, later barracks and officers' mess, now museum. 1739-41, for the Ordnance Board. Sandstone ashlar with gable and axial stacks, and slate double pile roof vernacular Baroque style. PLAN: single-depth plan closing S side of parade ground quadrangle.
EXTERIOR: 2 storeys and attic; 9:1-window range. A symmetrical front, with a right-hand corner block, has clasping pilasters, central 3-window section set forward to a raised pediment with flanking steps, thin cornice and parapet, and paired, stepped end gables. Round-arched central doorway with key and imposts, studded double doors and a first-floor clock set within a full-height round-arched recess; round-arched ground-floor small-paned windows, a boarded door 2 bays from the right, and segmental-arched first-floor windows with 8/8-pane casements. Left-hand return has a central round-arched doorway with large fanlight, margin lights and panelled door, a single segmental-arched first-floor casement, and 2 attic casements in the gables. Rear has irregular ground-floor late C19 inserted 6/6-pane sashes, possibly originally windowless, 6 first-floor casements as the front in 3 pairs, and a tall central round-arched cross window beneath a smaller casement to the stairs. The right-hand block is perpendicular to the main range and partly obscured by the W barrack block (qv), with a flattened gable and connecting parapet, left-hand segmental-arched doorway with fanlight and boarded door and a segmental-arched 8/8-pane sash above to the rear a coped gable with altered ground-floor door and 2 windows, 2 first-floor and a central attic window.
INTERIOR: has double panelled inner doors to a central dogleg stair with uncut string, splat balusters, square newels and moulded rail, and axial timber posts on the ground floor.
HISTORY: originally built as a storehouse in the same manner as the earlier barracks, shown as such on 1788 map, and later converted to an officers' mess. Part of the earliest planned barrack complex in England, predating most English barracks by nearly 80 years because of the need for a permanent garrison on the Scottish border.