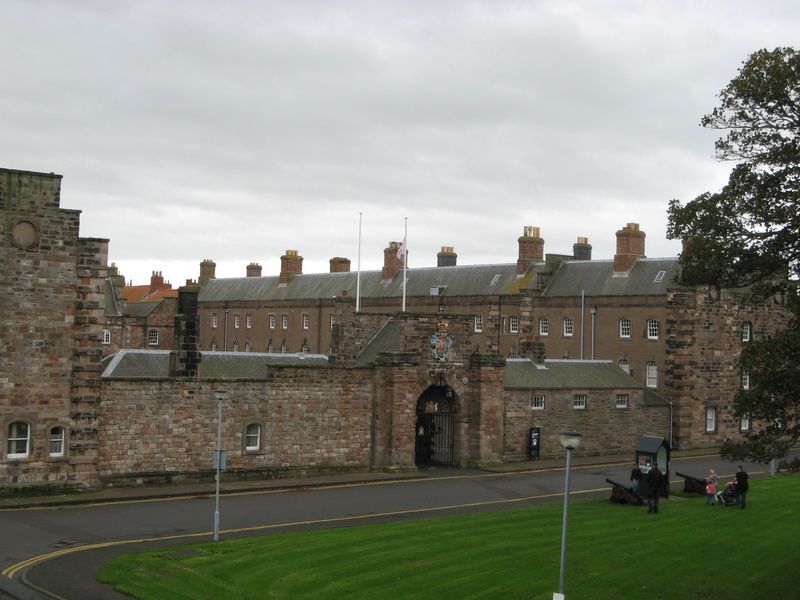 Barracks entrance gateway, guard house and offices now museum and mess. 1719-21, probably by Nicholas Hawksmoor, for the Board of Ordnance. Sandstone ashlar with ashlar left-hand lateral and single right-hand ridge stacks, and hipped slate roof. Vernacular Baroque style. Single-depth plinth blocks flank central gateway. EXTERIOR: single storey; 3-section range. The street front has heavy pilaster strips either side of a semi-circular archway with key and impost blocks, wrought-iron double gates, and a raised parapet above containing a gilded and painted coat of arms cartouche of George I; right-hand former guard house has 3 small flat-arched windows under the eaves, and the mess to the left has a parapet, stepped down to the left, with a single segmental-arched plate-glass sash.
The parade ground elevation is similar with raised parapet to tl1e gateway, 6-window guard house with a mid C19 cast-iron glazed verandah, and 5-bay mess with 8/8-pane sashes and central inserted C20 half-glazed door. Closes the N end of the parade ground.
INTERIOR: without special features.
HISTORY: part of the earliest planned barrack complex in England, pre-dating most other English barracks by nearly 80 years, because of the need for a permanent garrison on the Scottish border. One of a number of Ordnance buildings at this time associated with Hawksmoor and Vanbrugh.
(MacIvor I: The Fortifications of Berwick on Tweed: London: 1972-: 8, 29; Barker N in Chaney and Bold (eds): English Architecture Public and Private: London: 1993-: 199-230; Map of Berwick-on-Tweed: 1788-: PRO, WO78/1172).