Enginehouse, Chimney and Headstocks at the Former Pleasley Colliery 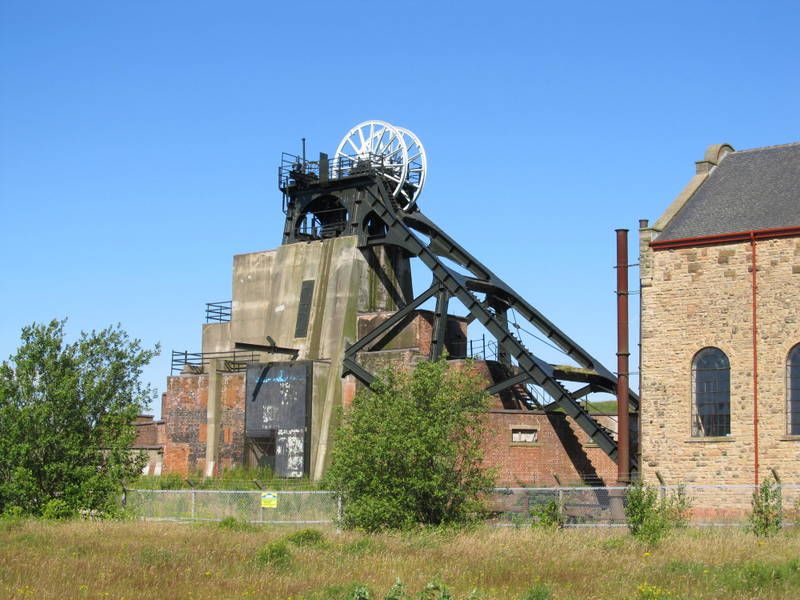 Engine house and chimney at the former Pleasley Colliery. 1873, restored 1922.
Coursed rock-faced sandstone and red brick. Slate roof, hipped at one end and gabled
at the other, with copings and plain kneelers. Louvred lantern on the ridge of the
roof. T-plan. Four large round-arched windows to each side, with iron casements.
Projecting gabled bays at the north end, each with an arched top. Inside, were a pair
of large twin cylinder horizontal steam winding engines built by Markham & Co. Ltd.,
probably dating from the 1920s. These powered the two lifts in the adjacent
headstocks up until the closure of the mine, an unusual survival. The steam for these
engines was raised in a bank of nine Lancashire boilers. A tall brick chimney is
attached to the south; the corresponding chimney to the north has been truncated. The
adjacent headstocks were built in 1898 and 1904 and are of steel construction on a
concrete substructure. Pleasley Colliery was one of the first pits in the country to
use electricity underground.