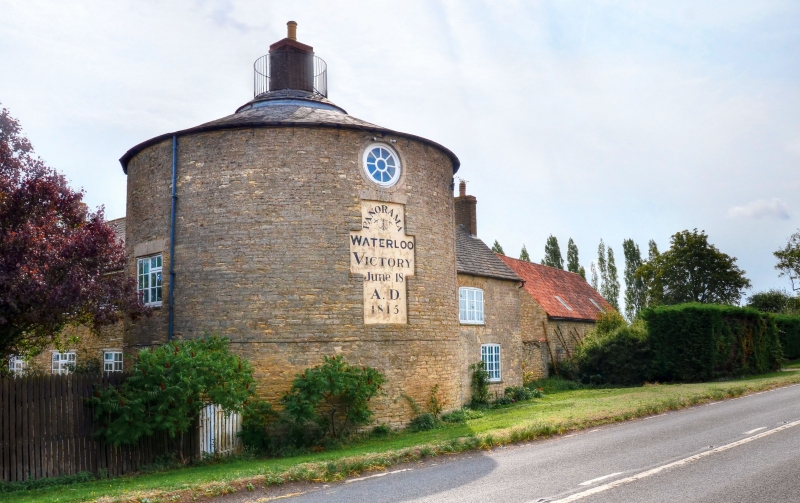 Entry Name: The Round House (That Part in Burton Latimer County Parish) and Attached Barn to Right

BURTON LATIMER
SP97SW THRAPSTON ROAD
1337-0/10/2 The Round House (that part in
Burton Latimer CP) and attached barn
to right
II
Farmhouse. Early and mid C19 with late C20 alterations.
Coursed limestone rubble with slate roofs and C20 brick
stacks. L-plan formed by 3-storey round tower with 2-storey
blocks to right and rear. Tower has a large cross- shaped
rendered panel painted with the words
"Panorama/Waterloo/Victory/June 18/A.D./1815". Above is an
oculus and to left and right, at ground and first floor level
are 2-light windows with stone flat-arched heads and C20
casements. Conical roof topped by small railed viewing
platform and central chimney. Block to right, probably an
addition, has a blocked door, now window, to left (porch
removed) and 3-light windows to right of ground floor and to
first floor, all with segmental gauged stone heads and C20
casements. End stack, then a low link to barn to right, of
limestone rubble with pantiled roof. Block to rear, originally
stable, heightened and substantially altered to form domestic
accommodation, contains present entrance. Interior altered and
original stair removed. Built for the Arbuthnot family of
nearby Woodford House, Woodford C.P., east Northamptonshire
(q.v.), after a visit by the Duke of Wellington who
apparently mentioned that the countryside reminded him of the
land around Waterloo. The film "The Battle of Waterloo",
directed by Charles Weston for the British and Colonial
Kinematograph Company (1913) was made at this site.