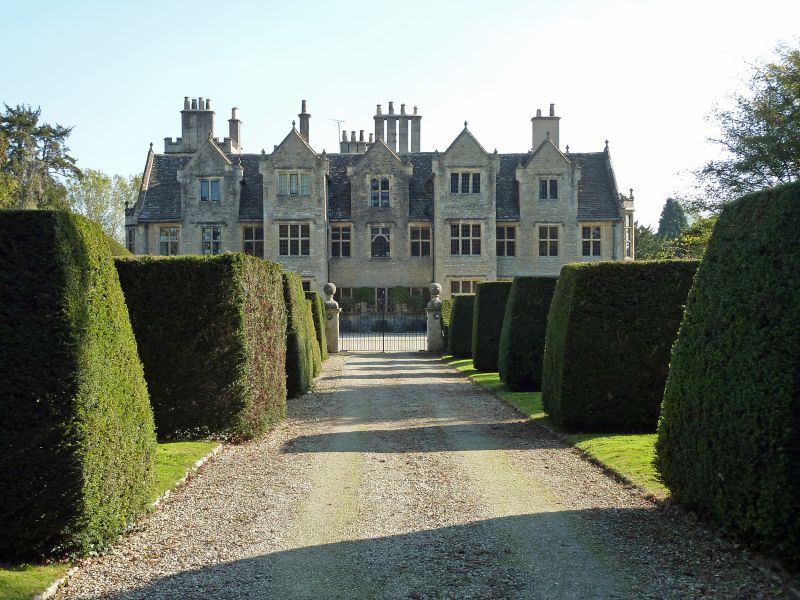 Find accommodation in
Shipton under Wychwood

SHIPTON-UNDER-WYCHWOOD HIGH STREET
SP 2617-2717
7/64 Shipton Court
27.8.56
GV II*
Country house. Built circa 1603, remodelled in 1633 and in the C18 and drastically
restored by Bulmer and Perkins 1903-06. Coursed rubble with Cotswold stone roofs.
Irregular plan, symmetrical to west and with a courtyard to north; many gabled
Cotswold Jacobean style. Mullion and transom with drips, coped verges with kneelers
and carved finials, tall ashlar chimneys with square shafts and common cornices,
some joined and some open. Two storeys and attics. Symmetrical west front with 5
gables, 2 projecting one bay giving rhythm 3:1:3:1:3 to windows. Central gable has
lost its entrance (replaced with mullioned windows), above is a window with Ipswich-
pattern glazing and in the attic a large 2-light transomed window with ogee heads,
only this and the other attic windows are original. Moulded elliptical head door-
ways in returns of projecting bays (left one blocked). Two-storey angled bays in
gable returns. Crenellated tower adjacent to north gable. The north, south and
east fronts gain an extra storey with the fall in ground level. North front has a
low service courtyard of 1903 with Tudor-arch openings. The north-east pavilion has
a build up of gables and retains original hollow-chamfer mullion and transom windows
(the south-east pavilion is replaced by the crenellated tower referred to above).
The recessed centre has a string over third floor and a small ogee arched bellcote
between the attic gables above. The east front has 3 principal gables and flanking
lower crenellated one- and 2-storey extensions, the southern one with angled
2-storey bay and Tudor-arched entry to steps up to terrace. The south front is
recessed behind a former Winter Garden.
The interior was very largely remodelled in Edwardian Jacobean style with plaster-
rib ceilings (tunnel vaulted on first floor), panelling and large wooden fireplaces
with mother-of-pearl inlay. The staircases are in the same style, the principal one
to south-east has large windows with reset heraldic glass and roundels, probably
Flemish, of C16 and C17. In the basement a chamfered round arch below the east wing
is thought to represent earlier fabric.
The house was bought in 1633 by the Reade family; it was left to a butler in 1902
and sold to a coal millionaire called Pepper soon after. In the C18 most of the
west front windows were sashes and a portico extended between the 2 wings. The
Bulmer and Perkins restoration is very much in the recreated Jacobean style and
included garden layout and terracing (qv). the house has similarities with
Chastleton Manor, Chastleton CP.
Country Life, Vol 7 (3.ij.1900).
M Groves: The History of Shipton-under-Wychwood) (1934).