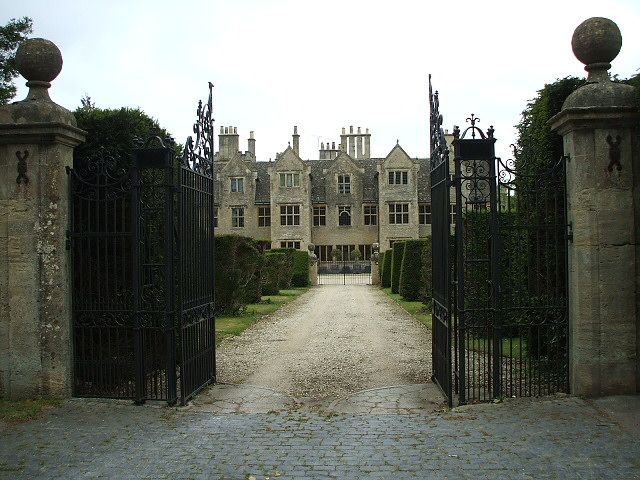 Find accommodation in
Shipton under Wychwood

SHIPTON-UNDER-WYCHWOOD HIGH STREET
SP 2617-2717
(east side)
7/71
Shipton Grange, Shipton
Grange House and East
- Boundary Wall
GV II
Converted stables. Circa 1903, perhaps by Perkins and Bulmer. North wing largely
C17 and C19. Coursed rubble with ashlar dressings and hipped roof in imitation
stone slates. Three ashlar chimneys, one lead-capped, louvred cupola to right.
Long low symmetrical block in a Vanbruggian style. Plain, raised end quoins, wide
impost level band. Consists of long ranges with a major central archway of 2 arches
and 2 subsidiary ones, all 3 segment headed and within pedimented ashlar gables (the
centre and left-hand ones with ball finials). Single storey to road; 1:2:2:2 rhythm
of arched blind windows (one glazed) in raised surrounds with impost and key blocks.
Panelled gables to centre (1905-06) and right-hand (late C20). Right-hand roof hip
contains bell housing. Late C20 rooflights at intervals. Carriage lamp of circa
1903 to central gable. Important return to north forming symmetrical approach to
Shipton Court with south wing of Ayton (qv). Five gables with blocked gable
openings, one 3-light mullion window to west. One chimney, 3 ridge vents and a
well-restored clock turret with cupola and wind-vane, this is in the east bay which
retains its stone slates (clock mechanism 1807, bell in cupola 1834); it has an
angled bay east front and balustrated parapet and acts as a garden pavilion to
Shipton Court (qv). Another important feature to Shipton Court is the east boundary
wall of the former stable yard (now belonging to Shipton Grange and Shipton Grange
House). This is circa 1900, rubble, about 12 ft high and links the east end of the
north wing with the dovecote (qv under Plum Lane). It is an important element in
the garden layout of Shipton Court.