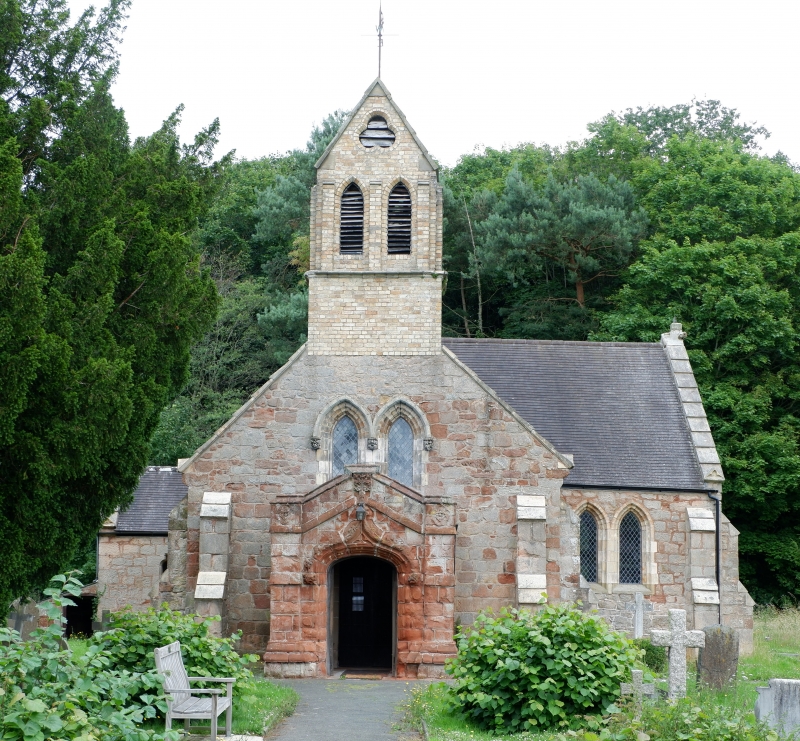 Nave. North side buttressed in three bays has original
round-headed window in west bay with projecting chevron decoration to soffit
of arch, hoodmould and moulded imposts; C19 windows in imitation to centre
and east bays. South side has elaborately moulded C19 paired broad
lancets with yellow brick heads to east of gabled transept. This has
triple stepped lancets with hoodmould and foliated label-stops to south
and paired broad lancets to east and west walls. Similar paired broad
lancets to west of transept. West wall has paired broad lancets with
hoodmould and head-stops. Gabled yellow brick bellcote above has pointed
louvred openings, double on east and west and single to north and south;
pierced trefoils above on east and west and fish-shaped weathervane.
Late Perpendicular-style porch has segmental arch with blind ogee above
and foliated label-stops; embattled parapet to sides continued round
to low-pitched gable. Chamfered rectangular windows on north and south
and door has blind Gothic tracery. Doorway of 1847 behind has shouldered
arch. Chancel. South side buttressed in two bays on chamfered plinth
continued to east end. Round-headed priest's doorway in west bay has
hoodmould, carved imposts and projecting chevron decoration to soffit
of arch. Recessed segmental tympanum and one order of shafts with waterleaf
carving to capitals. C19 Romanesque-style window to east. East window
of 1847 has triple round-headed lights with chevron decoration to soffits,
divided by plain pilasters with moulded imposts. Recessed quatrefoil
above. Twin-gabled vestry/organ chamber to north has round-headed windows
to east and to west gable on north. Lean-to to west has doorway with
shouldered arch.

INTERIOR. Apparently blocked late C12 north arcade
of four single-chamfered round-headed arches with hoodmould, circular piers,
square chamfered bases, moulded capitals, one with waterleaf carving,
and polygonal abaci. The whole leans inwards to south suggesting that
it is not in situ. Heavily restored C17 double-purlin roof in three bays
to nave with raking struts from collars to principal rafters. Similar
C19 roof to transept supported on massive carved wooden corbels and C19
arch-braced collar beam roof in two bays to chancel with cusped struts
from collars to cusped principal rafters. Pointed chancel arch with
corbelled responds 1901. Round-headed arch (1901) on same line as north
nave arcade leads from chancel to organ chamber. Priest's door blocked
and C19 Romanesque-style piscina on north side of chancel. Tub-shaped
font with two plain bands to centre and to rim and base probably C12.
Stained glass in transept and in windows to east on south side of nave
1847, remainder late C19 or early C20, including east window of c.1915.
Other fittings and furnishings late C19 or later, although pews incorporate
some earlier panelling and reading desk has carved panel with superscription
"IB 1674". No monuments of note. The presence of the north nave arcade
is puzzling. There is no sign of blocked arches externally and the
window in the west bay appears to be genuine C12 work. The existence
of a short section of chamfered plinth to west of south transept indicates
that it cannot have been orginally on that side and prints of the church
made before 1847 do not show an aisle on that side. It may possibly
have been brought from another church. The earthworks of a substantial
and probably roughly contemporary motte and bailey castle (Scheduled
Ancient Monument, County No. 161) lie immediately to east. On building
the church, originally a dependent chapelry of Kinnerley, Ralph L'Estrange
granted the advowson to Haughmond Abbey.