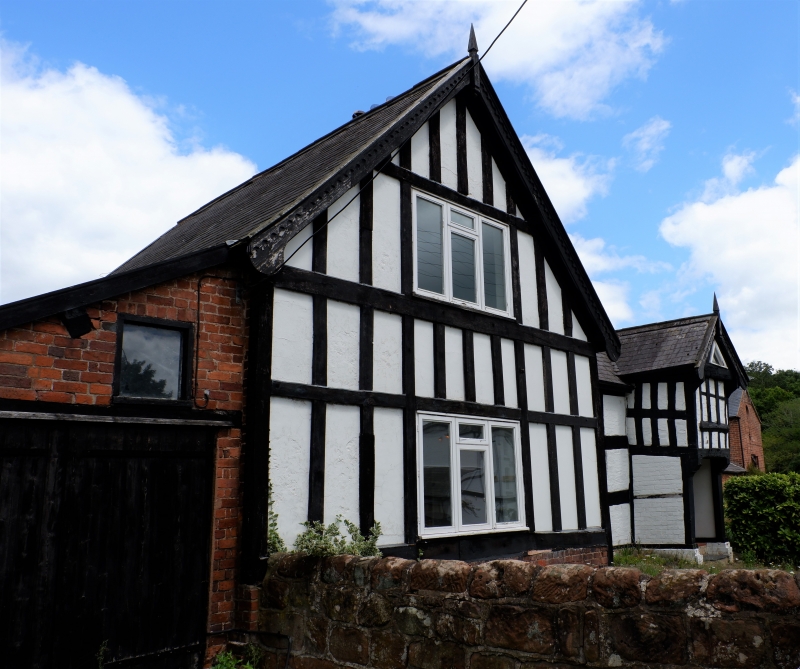 Farmhouse, now house. Early C17 with later additions and alterations.
Timber framed with painted brick infill and partial rebuilding; C20 planted
timber frame to front gable. Slate roof, graded to rear. L-plan
comprising hall range of 2½ framed bays with 2-bay cross wing projecting to
left. One storey and gable-lit attics. Framing: exposed to front
of hall range and to rear gable of cross-wing; square and rectangular
panels, three from cill to wall-plate. Narrow 2-storey gabled porch to
far right of hall range has jetties to first floor and attic and close
studding to first floor. C19 bargeboards and finials to gables, including
to porch. C20 casements, one on each floor to gable and one in centre
to hall range. Inner C17 plank door to porch and C19 boarded door to
cross-wing in angle with hall range. C19 red brick ridge stack to left
of hall range has two attached shafts with dentilled band and capping.
C19 red brick lean-tos to rear of hall range and to left side of cross
wing, former with tall stack to one corner and latter with dentilled
eaves cornice.