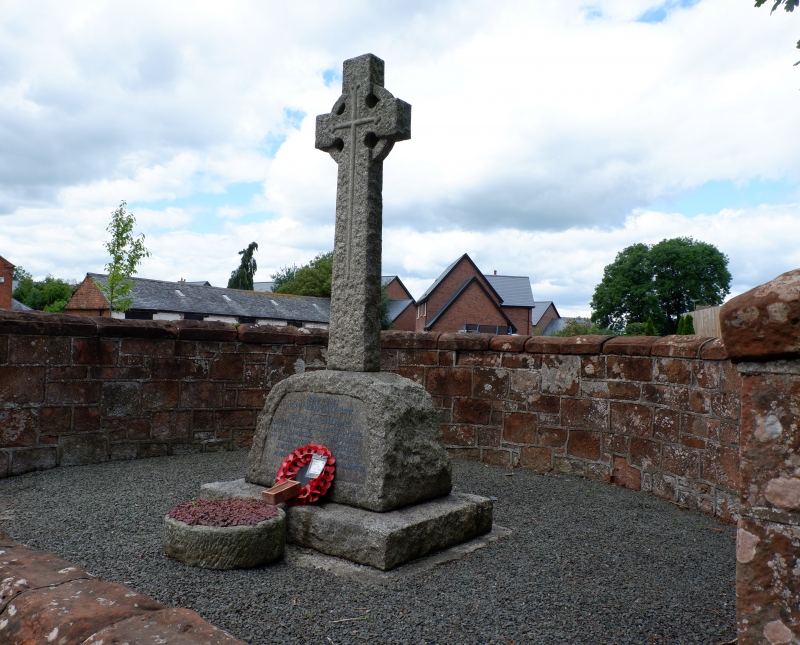 A War Memorial, built c. 1921, of grey granite, with raised lead lettering, and sandstone. The memorial stands on the north side of the B4396, at the centre of the village.

A War Memorial, built c. 1921, of grey granite, with raised lead lettering, and sandstone. The memorial stands on the north side of the B4396, at the centre of the village. It is of granite which is roughly hewn. It stands on a square platform, above which is a plinth with domed top which bears the names of the dead in a recessed panel to its south side. The raised, lead lettering reads: '1914-1918 / FOR FREEDOM AND RIGHT / (Names) / THEY GAVE ALL. The shaft is square in section and rises to join with the cross, which has a hollow circle surrounding the arms in the manner of a Celtic cross. To the front is a sword, carved in relief.
The cross stands on a raised, semi-circular terrace, set back from and above the level of the pavement. This is approached by two steps at left. The low front walling and the semi-circular walling to the rear are of irregular blocks of sandstone, brought to course, which match with the surrounding field walls and have large coping stones.

This List entry has been amended to add the source for War Memorials Online. This source was not used in the compilation of this List entry but is added here as a guide for further reading, 19 January 2017.

Knockin War Memorial was erected in 1921 to commemorate the dead of the First World War. The walling of the semi-circular enclosure surrounding the monument has been re-pointed in the later C20 with ribbon pointing.

The Knockin War Memorial is designated at Grade II for the following principal reasons:
* Historic interest: as a permanent testament to the sacrifice made by this community in the First World War;
* Design interest: for the effective and simple design and the combination of granite and sandstone materials;
* Group Value: for its relationship with other listed buildings in Knockin, including The Old House, Vine Tree House and the Church of St Mary.