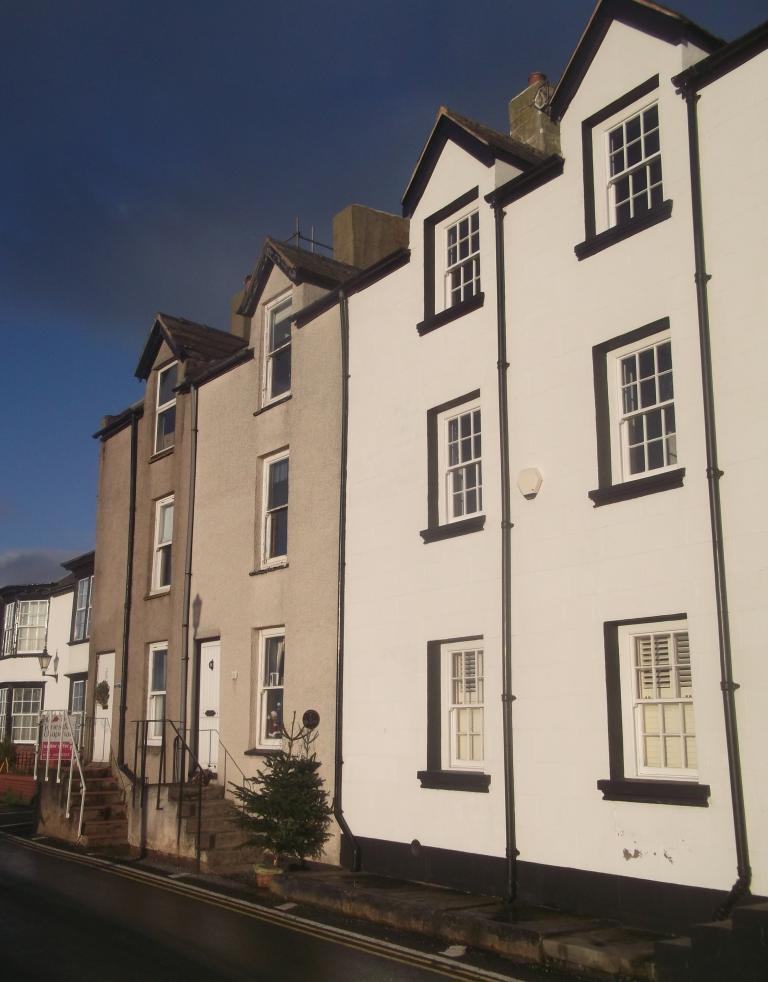 3 houses . Early C18, built before 1732; altered C19. Built with Teal Cottage [qv] as a row of three properties for the Mostyn Estate.
MATERIALS: Red brick, possibly stone dressings, pebble dashed. Earlier render with incised lines in imitation of ashlar exposed on front wall and visible on gable. Slate roof to front, green tiles on rear slope; gable coping, wide stacks straddle ridge at each end of Butcher's Shop, and left of Seven Steps.
EXTERIOR: SEVEN STEPS: 3 storeys over cellar; one bay wide, Butcher's Shop is two and a half bays. Seven Steps [left]: 6 stone steps built against the wall, the bottom step obscured by the raised street level. Plain handrail, raised ground floor. C20 front door in flush surround, C20 fenestration in rebuilt walling copies original arrangement. Rear: almost square windows to first floor and under eaves suggest the original early C18 fenestration. Single storey additional rear range.
INTERIOR: Lobby entry onto side of full width fireplace with mantel beam; longitudinal ceiling beams throughout, chamfered and with exposed roughly finished joists. Cupboard door above lobby entrance has scratched initials: 'AL' 'HI' 'W' and 'HE'. A plastered ceiling panel greater than the depth of the joists indicates the position of the apron in front of the upper floor [painted room] fireplace. Small rear room with corner fireplace and scored lines on ceiling beam; the present cellar entrance is through a trap door in the floor of this room. The cellar contains brick debris from the demolished front wall; the floor is supported by a brick wall on the line of the front/ rear room division, and 2 re-used longitudinal beams support the front room floor; a cross - beam supports the ground floor hearth structure. From the ground floor front room the full-height timber winder stairs have associated timber framed partitions and fielded panelling; doors have 4 fielded panels or are of plank construction, with H-hinges and original latches.
The first floor front room is screened from the stairs by a timber framed partition with horizontal rail and 4-panelled door. Within this room the painted wall decoration continues the line of the timber rail of the partition as a dado band with panelling below and open views above. The chimney wall has a fireplace with cast-iron hob grate of mid C18 type, the cheeks having rococo motif of a globe with plumes and pineapple. Painted decoration on the chimney breast includes a black frame to the fireplace, cream Delft tiles with figures, buildings and trees in blue, dado panel to left, shelf scar with a band of blue and a row of silhouettes of bushes and trees rising to ceiling level. There is also a row of scratched outlines of sailing boats. The recess to left of the chimney stack lost its painting in the rebuilding of the front [SW] wall.
The NE wall [the brick spine wall of the house] has painting carried up between the joists. Brush strokes of blue and grey are visible for the background landscape. A tall tree in the centre foreground appears to have been clipped into 3 tiers and a second tree is cone-shaped. There are two delicate branching plants flanking the centre tree.
The SE wall [party wall with Butcher's Shop] carries view of a wooded estuary. A bridge over a stream to a small island, two giant trees, an orchard or distant woodland beyond and a hill in the background. To the left a sailing ship is moving out to sea, towing a small boat and with a low headland to left. Trees on the right, and the remainder of the painting lost in the rebuilding of the front wall. Small attic rooms with original board doors and partitioning.
THE BUTCHERS SHOP: EXTERIOR : 3 storeys over cellar; 2 1/2 bays. 4 steps in straight flight to 6-panel door in flush wood frame far right. Fenestration, ground floor: left- a small lead-roofed canted bay window with timber mullions and 4-pane sash, wider C20 plate-glass shop bay window centre. First and second floors: recessed 4-pane sashes, paired dormers to attic storey. Rear: board door left; two low first-floor windows with C20 frames, possibly in original openings; narrow attic window under eaves. Added C20 single storey block. Right return: a small blocked ground floor window left.
INTERIOR: Not inspected but reported in September 1999 to contain chamfered spine beams, original staircase with turned balusters and C19 stick balusters, one late C19 fireplace.
TEAL COTTAGE: Exterior: 3 storeys over cellar. One bay wide, being the left end bay of a block four bays wide comprised of Teal Cottage, Seven Steps and Butcher's Shop, all of one build. Six steps against wall, with C20 handrail, to flush C20 front door left; blocked cellar window visible beneath render at foot of steps. C20 plate glass sash-style frames, the top storey in a narrow half-dormer with gabled roof. Rear: C20 window frames in probably original early C18 opening to attic storey; first floor window taller. Added C20 single-storey range.
INTERIOR: Lobby entry onto side of deep fireplace with exposed mantel beam across the full width of the room; chamfered spine beam and exposed joists. Small rear room with probably later C18 corner fireplace, C20 grate. Original joinery includes doors, partitions and full-height winder stair. Original ironwork survives, including strap hinges and latches. No access to cellar.

HISTORY: Parkgate village is thought to have developed as an anchorage in the late C17 by Sir Thomas Mostyn who had lead mining interests in north Wales. By 1710 Park Gate was one of the principal ports of embarkation for passengers to Ireland, the anchorage being used by packets and by the Royal Yachts, the official vessels of the Lord Lieutenant of Ireland. The Mostyn Estate map of 1732 shows the row of three houses clearly, with ships anchored close to the shore. By 1740 the London Lead Company shipped lead from their smelting mills at Bagillt across the estuary to Parkgate. Extensive C18 records of the movement of goods and people through the port to Dublin identify Irish farm workers, vagrants being returned to their parish under Poor Law regulations, Handel on his way to the first performance of the Messiah, and John Wesley. By the late C18 there was a ship-building yard in the town, and five 'Captains in the Dublin trade' are recorded in the Chester Directory in 1782, the town being described as 'the resort of elegance and fashion' . The port closed in the early C19 as the Dee estuary silted up and Liverpool was prefered as a deep water port, and better roads were built to Holyhead. The town continued as a popular holiday resort during the C19.
The construction of the row of three houses is thought to have been to provide accommodation for passengers and traders using the port. The wide frontage of Butcher's Shop suggests a permanent residence and its early C19 recorded use as a slaughterhouse, continuing into the C20, reflects the continuing trade in cattle and leather. The wall paintings, discovered in 1999 in what would have been the principal living room of Seven Steps, reflect the popularity of Dutch interior decoration, while the deliberate use of scenic views in a 'trompe l'oeil' style would have distracted those waiting long hours to catch a boat.