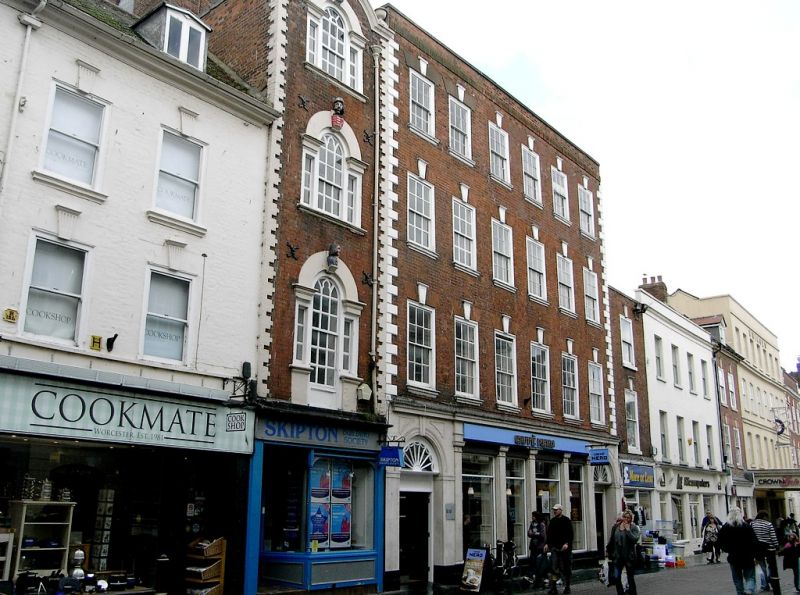 2 houses, probably originally with shops, now bank. One build,
probably c1750, possibly with earlier origins and with later
additions and alterations including ground floor shop front
c1920.
MATERIALS: Pinkish red brick with flat arches of red gauged
brick, stone quoins, keystones and ground floor bank frontage,
concealed roof and end brick stacks. EXTERIOR: 4 storeys, 6 first
floor windows. Quoins from first floor to full height. 6/6 sashes
to first, second and third floors in near flush frames, with
moulded sills and flat arches with raised, engraved keystones
with cornices. Renewed eaves band and low, coped parapet. Ground
floor has unified shop frontage with end entrances,
8-raised-and-fielded-panel double doors with fluted frieze in
pilastered reveals and with fanlights with decorative glazing
bars and panels to spandrels over, between these are 4 plate
glass windows on panelled aprons and with pilasters between,
stepped frieze, continuous cornice which breaks forwards over
windows.
INTERIOR: ground floor altered, otherwise not inspected but said
to retain original plasterwork and joinery including staircase
with stick balusters at first floor and dado rail.
HISTORICAL NOTE: 'By the sixteenth century, Broad Street was
second only to High Street in commercial importance. On the
direct route through the city from the (Worcester) Bridge (qv),
it contained the business premises of a number of important
traders and at least two inns.' Several houses on Broad Street
are known to have C17 and earlier origins (Nos 32, 40, 41 and 57
(qqv)). All the listed buildings in Broad Street form a
significant group: Nos 10, 10A, 11, 12, 18, 19, 29, 32-36
(consecutive), 40, 41, 43-49 (consecutive), 69, 70 and Church of
All Saints (qqv). (Hughes P: No.57 Broad Street, Worcester:
Report for Worcester City Council: 1991-).