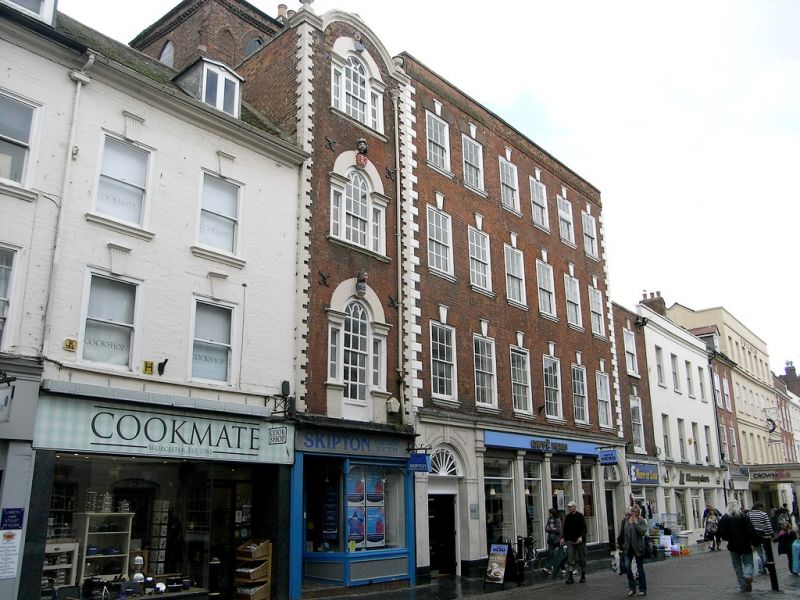 Formerly known as: Cupola House BROAD STREET. House, possibly
with shop, now bank with office over. c1740, possibly with
earlier origins and with later additions and alterations
including c1980s ground floor shopfront.
MATERIALS: Red brick in Flemish bond with stone and artificial
stone dressings, concealed roof. EXTERIOR: 4 storeys, single bay.
Quoins from first floor to full height. Segmental pediment with
ornamental urns at sides. From first floor: 1 Venetian window
each floor with round stuccoed arch over and human figure head
keystone, that to first floor has central 6/9 window with Moorish
style glazing bars to round arched head and on apron, between
3-pane lights on plinths and with cornices, that to second floor
has central 6/6 sash with similar Moorish style glazing bars to
head between 3 pane lights with cornices and with long, moulded
sill, that to third floor has 6/6 sash with radial glazing bars
to head and between 3-pane lights with cornices and with long,
moulded sill, all windows in near flush frames. Ground floor has
renewed shop front with glazed window and part glazed entrance
set back at left. To roof domed belvedere (or cupola) rises over
stairwell with pointed doorway and plank door to front (giving
access to roof terrace) between 2 blind pointed windows, cogged
band, pointed windows with 'Y' glazing bars to east and west
sides and further similar window to rear. Four x-shaped tie rod
ends (two to second floor, two to third floor). Fall pipe with
lead rainwater head. Rear retains 6/6 sashes.
INTERIOR: retains much original joinery and plasterwork including
open newel staircase with Chinoiserie balustrade and shaped
handrail to full height of house. Landing has plank panelling to
dado. First floor front room has wooden chimneypiece with eared
surround with egg and dart moulding and shell motif, carved swags
and frieze, cupboard at right has 4-raised-and-fielded-panel
door, raised-and-fielded panelled dado, panelling continues to
window surround with window seat. Rear first floor room has
Victorian cast iron fireplace. To second floor front room has
Gothick plasterwork to ceiling, chimneypiece has pilasters to
sides and cornice, cast iron H-grate and kettle hook, cupboard to
right with 4-panel door. Second floor rear room has chimneypiece
with C18 eared surround surmounted by shelf frieze made of
probably late C16 Welsh Dragon frieze and cornice. Third floor
has 2-panel doors (raised and fielded to front, plain to rear)
with HL hinges, fireplace to front room has roll moulding, both
have cast iron grates. Belvedere rises over well of stair and
entered through trap door closing in top of stairs, rectangular
room with pointed doors, one onto roof and one into rear room at
slightly lower level, gazebo with pointed doors and sparse
Gothick plasterwork decoration to ceiling, rear window aligned to
overlook tower of Worcester Cathedral (qv).
SUBSIDIARY FEATURES:: Figure-head keystones surmounting Venetian
windows appear to relate to social types: that to upper floor is
a cleric and turns to right, that to second floor is a soldier
(also turning to right), whilst that to first floor may be a
lawyer or merchant and turns to left (the direction of the
river). The significance of these figures is yet unknown.
HISTORICAL NOTE: during the C19 this was known as Cupola House,
in 1831 Edwin Lees, naturalist and printer lived here; Lees wrote
a 'Natural History of Worcestershire' and 'The Stranger's Guide
to Worcester'. In 1837 it was the home and shop of Thomas Louis
Woodall, bookbinder and seller; from 1896-1940 it was owned by
Miss H Burrow, corset and stay maker. (Information supplied by
Skipton Building Society). Hughes states that, 'by the sixteenth
century, Broad Street was second only to High Street in
commercial importance. On the direct route through the city from
the (Worcester) Bridge (qv)., it contained the business premises
of a number of important traders and at least two inns'.