Church of St Giles the Abbot 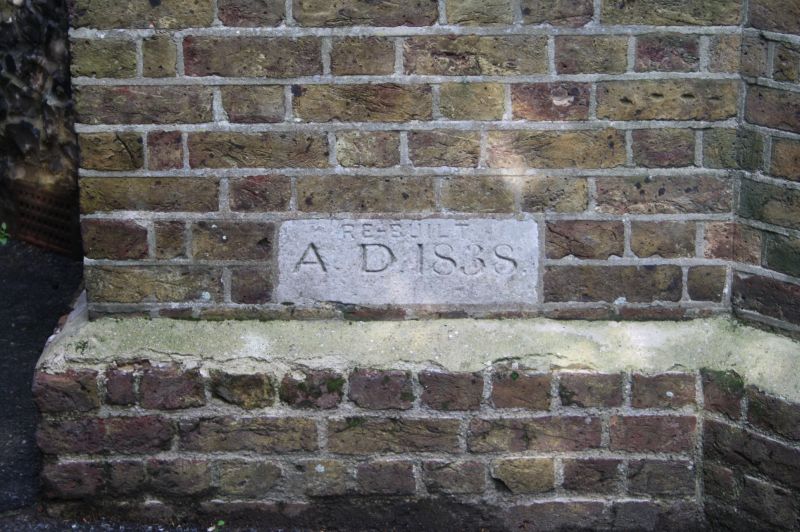 Nave possibly C12 in origin. Chancel C13 in origin. N chapel added C14. W tower of uncertain date. The nave and possibly the tower were rebuilt or heavily restored c.1640. The W tower extensively repaired in 1838 by a Mr Blackshaw, who also added the SW vestry. The chancel was largely or entirely rebuilt in 1886 to designs by Joseph Clarke. NW vestry added in 1903. The tower was repaired and reroofed in 1951.

EXTERIOR:
The chancel was largely rebuilt in 1886, and has two lancets on the N and three on the S, with an additional lancet in the N organ chamber, partly based on the arrangement of the C13 chancel. The triplet of lancets in the chancel E wall are late C19. The nave was partly or wholly rebuilt c.1640 and has two light windows with plain, square heads and a central mullion. Those in the N wall are C17 and have brick dressings and a brick mullion; those on the S were rebuilt in 1895. There are heavy buttresses in C17 brick on the S side, and the shallow plinth on both sides also has a brick edging. The small N chapel has a two-light C15 N window with cusped lights. The W tower is of uncertain date, but may also have been rebuilt in the C17. There are blocked openings with red brick dressings visible above the vestry roofs on either side, and others in the second stage. Substantial stock brick buttresses on the W side added in 1838, when the S vestry was also added. The tiled, pyramidal cap roof is 1951, replacing a plain parapet with pinnacles of the early C19. The W door was rebuilt in the early C20. Early C20 polygonal N vestry with Tudor style brick windows; early C19 S vestry.

INTERIOR:
The interior is plastered and painted. The C19 chancel arch is in a C13 style and has small roll mouldings dying into the wall on both faces. The chancel E windows have roll mouldings, Purbeck marble shafts between the lights and C13 capitals on the sides. The opening to the NE organ chamber is formed by curved braces to the wall plate for the chancel roof. The C19 opening to the N chapel is supported on a straight, iron beam supported on short, flat, corbelled responds. The W gallery is C17 in origin, and has a panelled front on slender, square columns. The organ loft of 1960 with an attractive organ case. Nave roof has king posts with curved braces to the main beams. Of mid C17 date, it reuses much older timber.

PRINCIPAL FIXTURES:
Late C14 font, polygonal with quatrefoils and rosettes on the bowl and tracery panelling on the C19 stem. It has traces of original colour. Nave benches with doors of 1854-5. Choir stalls and altar rail of 1935. Two-light N aisle window by William Morris c.1860; the rest of the glass is C20. Large wall tablet to Thomas Brome, d. 1673, signed by Jasper Latham. At the W end, a tablet for Dr Thomas Young, d.1829, a pioneering scholar of Egyptian hieroglyphics. Bronze wall plaque of Christ and the Apostles in an Epstein-influenced style by Elise March (1883-1974) for Mrs Kelly, 1939. Early C19 benefaction board for gifts of George Dalton, 1566.

HISTORY
Farnborough church was in existence by 1070, when it listed as a chapel of Chelsfield, and it remained a chapel of Chelsfield until the late C19, when an independent parish was created. The present church was probably built in the C12 and the chancel was added or extended in the C13. The N chapel was added in the C14. The roof and parts of the walls were destroyed in a storm in 1639. The nave roof was rebuilt in its present form reusing older materials, apparently from a late medieval hammer beam roof. The tower may also have been built or rebuilt at this time, and the chancel arch and the E window were remodelled. The C17 E window was of three lights with uncusped, segmental heads and had a high transom. The dressings appear to have been of rendered brick, and the rere-arch had a straight head supported on corbelled brackets, possibly formed from C13 capitals. The deep rebates on the sides of the former E window jambs suggests that the C13 E window had outer jamb shafts. The former chancel arch, possibly also C17, was a plain, wide opening with a canted shape following the form of the chancel roof.

The tower had a spire, damaged by lightening in 1728, but still in existence in the late C18. In 1838, the tower was again struck by lightening, and was subsequently extensively restored and rebuilt by Mr Blackshaw, who added the W buttresses and the S vestry, blocking older openings in the process.
The opening into the N chapel was rebuilt in 1886 to designs by Joseph Clark, and replaced a `low arch¿ of uncertain, presumably medieval date. He also rebuilt the chancel and replaced the C17 E window. The NW vestry was added in 1903. The tower was reroofed in 1951 following a fire in 1949.

REASONS FOR DESIGNATION
The church of St Giles the Abbot, Farnborough, is designated at Grade II* for the following principal reasons:
* Medieval chapel of ease, nave C12 in origin, chancel in C13 with C14 north chapel.
* Rare surviving evidence of c.1640 rebuilding of nave, including original windows domestic in character.