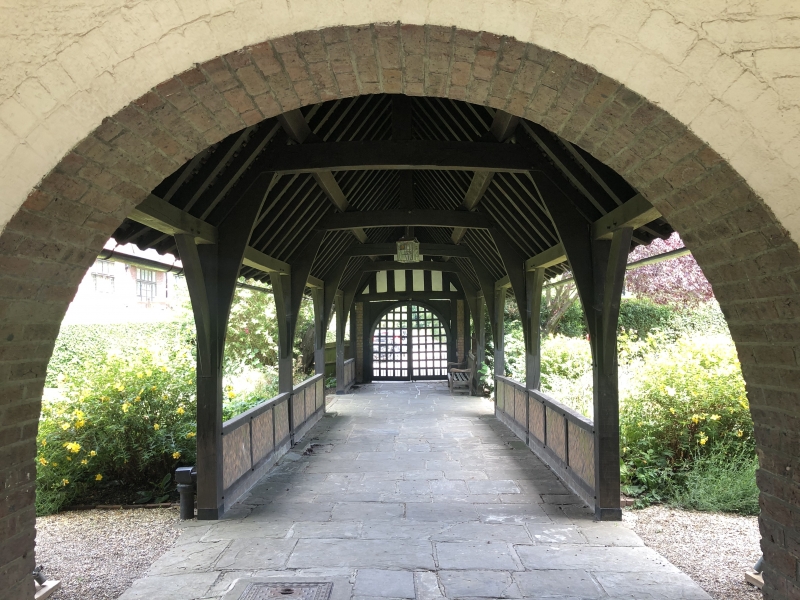 Philanthropic housing for young women. 1908-09, to the design of M. H. Baillie-Scott, for the Improved Industrial Dwellings Company, founded in the 1860s by Sydney Waterlow. Brick, limewashed inside courtyard; timber framing with brick nogging; roofs and dressings of tile. Lych-gate like structure at the end of Heath close leads to timber-framed and covered walkway to two-storey quadrangle; on main axis a three-storey, gable-facing pavilion projects, with windows in diminishing widths and numbers to gable; flat-roofed dormers throughout; the intersection of pavilion roof with main ridge of quadrangle marked by timber cupola. High axial brick stacks each range. The most arresting features of interior are the the round.-arched arcades to the ground floor of all interior elevations which create a 'cloister' effect and which serve as walkway to ground-floor flats as well as giving access to stairs. Access off cloisters to fine dog-leg staircases with eighteenth-century style balusters and Jacobean style handrail and newel posts with turned finials. Accommodation is arranged in 3 to 5 room flats, simply designed with similar plank doors and cupboard doors with H-L hinges; some rooms retain open fireplaces. Former communal dining area, now flat, in gabled block to rear of courtyard not inspected. Window widths of cloister ranges vary slightly. Mullioned, leaded casements of an original design. Timber framing to exterior elevations. Included also is the attached Bungalow, of one storey, 6-window range and in similar style, with similar doors and fenestration. Waterlow Court was built as flats for working women and also contained communal rooms. The original fittings, door and window furniture made by J. Pyghtle White of Bedford for Ambrose Heal of London. Waterlow Court is rightly one of the most widely admired and studied of the Garden Suburb buildings: the high architectural quality derives from excellent proportions and the subtle relationship among window openings dormers, stacks, and, most memorable of all, the arcaded cloister.