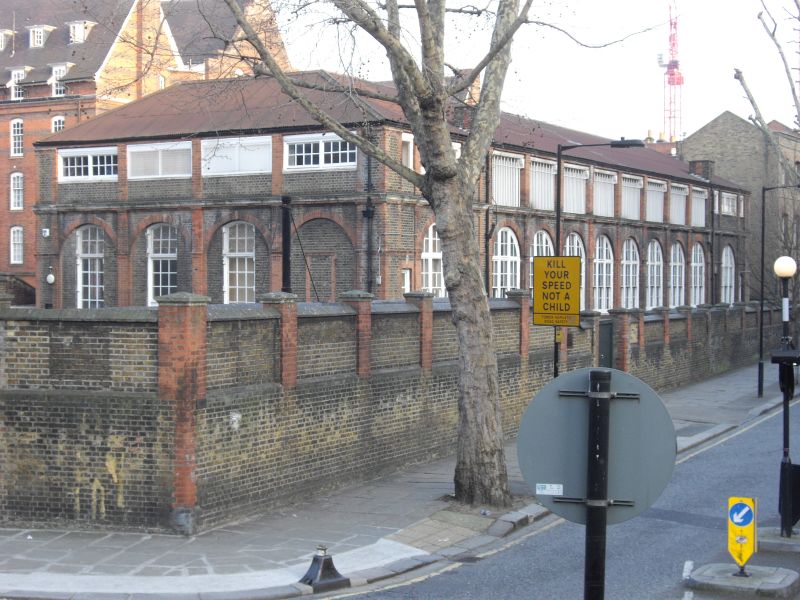 Infant school, 1879 by ER Robson for the School Board for London.

PLAN: the plan loosely follows ER Robson's 1874 model arrangement for a large single-storey infant school, comprising a large, cross-ventilated schoolroom framed at either end by two pairs of smaller classrooms for junior and senior infants. Access is via twin doorways in the low ancillary ranges at the rear, which also contain cloakrooms, lavatories and a staff-room; these flank a central stair-tower giving access to a covered roof-top playground and exercise yard.

EXTERIOR: the external treatment shows the restrained 'Queen Anne' manner favoured by Robson in his SBL work, characterised by moulded red-brick decoration and large, white-painted multi-pane sash and casement windows. The main west elevation to Club Row is of ten bays arranged 1-8-1. The middle eight bays contain the schoolroom and are treated as a continuous arcade, with large tripartite windows in arched openings divided by fluted red-brick pilasters. The broad outer wings contain the classrooms, and have similar arched openings flanked by narrow rectangular windows with keystone heads; they also once had tall chimney stacks, now truncated. A moulded stone cornice runs the full width of the building; above it, the first-floor playground is enclosed by plain iron railings set between square brick piers, the latter in turn supporting a low-pitched hipped roof clad in (replaced) corrugated metal sheeting. This extends across the outer wings, which have low enclosed attics. The arcading continues on the return walls (though with single rather than tripartite windows) and on the rear elevation, between the deep projections formed by the outer classroom wings and central stair-tower. The latter has twin covered access flights (for senior and junior infants) at the lower level, and slightly canted upper walls to allow light to the semicircular windows in the east schoolroom wall; it is crowned with a shaped gable. Between the stair-tower and the classroom wings run low, flat-roofed ancillary ranges, each with an entrance doorway in a lugged stone surround; a smaller arched doorway leads to the cellar.

INTERIORS: the principal interior is the schoolroom, which occupies the middle eight bays of the ten-bay building. Cross-ventilated and lit from both sides, it is divided into three semi-enclosed sections by brick cross-walls with large round-arched openings, allowing multiple classes to be taught by trainee teachers under continuous supervision by the head teacher. The high ceiling in this room displays an unusual degree of embellishment, its structural wrought-iron beams sheathed in decorative timber boxing with cut-work ornament, moulded pendants and elaborate scrolled brackets. The end classrooms once had interconnecting doorways - again for supervision as well as access - and corner fireplaces, all now blocked. The original wood-block floors survive in most areas. The stair-tower at the rear contains what Robson called an 'easy staircase', with comparatively deep concrete treads and low risers, its two lower flights converging on a landing with a barred iron gate, beyond which a dog-leg upper flight leads to the roof. The playground here is fully covered by an open roof structure with wrought-iron trusses and ties; the south-east part has been rebuilt in timber.

The Nichol Street School was opened in 1879 by the School Board for London (SBL) to serve the area known as the Nichol, one of east London's most notorious slums. It replaced the adjacent Ragged School of 1866, and supplemented the Board's other nearby school at New Castle Street, opened in 1875. The 1879 school, designed by the SBL's chief architect ER Robson (1835-1917), comprised two main buildings: to the south, a single-storey mixed infant school (the present building) accommodating 363 pupils, and a two-storey school to the north containing the schools for older boys and girls, each with 312 pupils. This was Robson's preferred arrangement, advocated in his 1874 book School Architecture, although the demands of space ensured that the 'triple-decker' type, with boys', girls' and infant schools placed one on top of another, remained the norm for most of the SBL's existence.

The Nichol itself was transformed in the 1890s, when the newly-formed London County Council razed the entire district to the ground and rebuilt it in the form of the celebrated Boundary Estate - London's first large-scale council housing project. Only the two schools were retained; at Nichol Street (now Rochelle Street) the upper school was enlarged, and a new boundary wall was built to resolve the difference in orientation between the infant school and the renamed and realigned Club Row. The infant school passed out of teaching use in 1933, and has since had a number of uses, most recently as an events venue. It is perhaps the least-altered surviving example of an early SBL infant school, its characteristic arrangement of shared schoolroom with paired end classrooms and roof-top playground contrasting with the multi-storey classroom-and-hall plans typical of the SBL's later schools.

The Elementary Education Act of 1870, steered through Parliament by the Liberal MP William Forster and thus known as 'Forster's Act', established for the first time a system of national, secular, non-charitable education for children between the ages of 5 and 13. A driving force behind the new legislation was the need for a literate and numerate workforce to ensure that Britain remained at the forefront of manufacturing and commerce. Moreover, the extension of the franchise to the urban working classes under the 1867 Reform Act also alerted politicians to the need - in words attributed to the then Chancellor - to 'educate our masters'. The Act required public elementary schools, managed by elected school boards and funded through local rates, to be established in areas where existing provision was inadequate. The SBL was the first such board to be founded (in 1870), and the most influential. It was one of the first fully democratic bodies in Britain, with a franchise that included both women and the working class. Its 49 initial members - under the chairmanship of Lord Lawrence, a former Viceroy of India - included five MPs, eleven clergymen, the scientist Thomas Huxley, the pioneering woman doctor Elizabeth Garrett Anderson, the educationalist and suffragist Emily Davies and the master cabinet-maker and working-class radical Benjamin Lucraft. The Board's ambitious and progressive policies were epitomised in a by-law of 1871 compelling parents to send their children to school; attendance was not enforced nationally until 1880.

Such was the achievement of the SBL in the last quarter of the C19 that by the Edwardian period few neighbourhoods in inner London were without a school designed by Robson (who took general responsibility for the design of all London board schools from the mid-1870s onwards) or his successor TJ Bailey. Around 500 board schools were ultimately built in the capital, many in poor and densely-populated areas where they were (and often remain) the most striking buildings in their locality. Robson's adoption of the newly-fashionable Queen Anne style was a significant departure from the Gothicism that had prevailed in earlier school design, creating a distinctive aesthetic that underlined the Board's commitment to secularism in education. In the words of Charles Booth, justifying the expense of more elaborate schools in the East End: '[i]t was necessary to strike the eye and hold the imagination. It was worth much to carry high the flag of education, and this is what has been done. Each school stands up from its playground like a church in God's acre, ringing its bell.' Sir Arthur Conan Doyle, in his short story 'The Naval Treaty' (1894), has Sherlock Holmes echo the reformers' confidence in the transformative power of universal education, hailing the new metropolitan landmarks as '[l]ighthouses, my boy!... Capsules with hundreds of bright little seeds in each, out of which will spring the wiser, better England of the future'.

The former Nichol Street Infant School, of 1879 by ER Robson for the School Board for London, is listed at Grade II for the following principal reasons:

* Planning interest: probably the best surviving example of one of Robson's early single-storey infant schools, with an interesting transitional plan incorporating both a traditional schoolroom and two pairs of smaller classrooms, and with a unique covered rooftop playground;

* Historic interest: an exemplary instance of the work of the School Board for London, whose great building programme in the wake of the 1870 Education Act transformed elementary schooling in the capital and laid the foundations of London's state education system; the school has added interest as one of two built to serve the Old Nichol, one of Victorian London's most notorious slums;

* Group value: with the adjacent upper school building, keeper's house and boundary wall, and with the various buildings of the LCC's Boundary Estate.