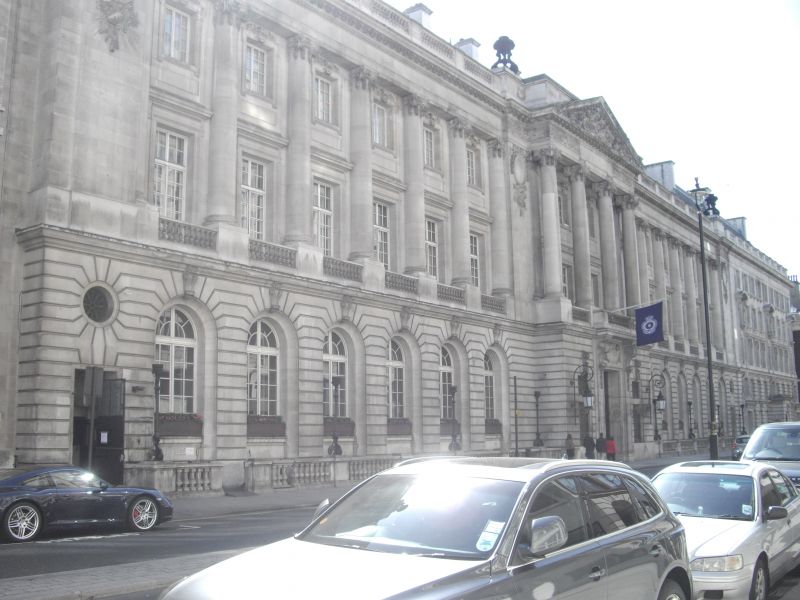 TQ 2980 SE CITY OF WESTMINSTER PALL MALL, SW1
82/69 (south side)
5.2.70 Nos. 89 to 91 consec:
The Royal Automobile
Club
G.V. II*
Grand club-house. 1908-11 by Charles Mewes and Arthur Davis with E. Keynes
Purchase. Steel frame and concrete cased in Portland stone slate roof.
Palatial Dixhuitieme elevation derived from Gabriel's Place de la Concorde
facades and equally appropriately, J.H. Mansart's Place Vendrome. (c.f.
the pavilion occupied by the Ritz Hotel and fitted out for Ritz by Mewes.)
3 main storeys, basement and dormered mansard. Slightly advanced 3 window
wide pedimented centrepiece pavilion flanked by 6-window wide wings.
Channelled ground floor with central entrance having a finely proportioned
architrave doorcase with panelled reveals (flanked by narrow side windows),
the head framed by large rich console brackets surmounted by stone
balustered balcony in the Gabriel manner. The wings have semicircular
arched windows, their metal casements recessed in concave reveals. On the
upper floors the windows have architraves with cornices to the French
casements of the "bel stage" and panelled aprons and enriched keys on the
2nd floor. Both floors are articulated by a grand giant Ionic order,
engaged to the wings and free standing in antis to the centrepiece, both
the latter and the wings flanked by broad piers with wreathed Gabriel
cartouches and pendant trophies, supporting a modillion corniced
entablature with carving in the frieze over the piers and with the
centrepiece surmounted by a figure sculptured pediment. Balustrades
between the pedestals of the giant order and balustraded parapet fronting
the dormers with iron flambeau-vases above the terminal piers. Balustraded
area with 4 lampstandards and ornate bracket lamps flanking central
entrances. The rear to Carlton Gardens has an elevation more reminiscent
of Francois Mansart or Le Vau in the plastic modelling of its planes.
Interior an excellent example of Beaux Arts planning on the grand scale
with vast public rooms decorated in "stuc" in very convincing (if typically
rather overscaled) late Louis XV/Louis XVI or Grand Siecle style by
Boulanger and by Remon of Paris combined with Palladian and neo-Chambers
interiors by Lenygon and Morant; spectacular basement "Pompeian" swimming
pool with scale patterned mosaic columns of a type previously designed by
Mewes for the Gallery and Spring Pavilion at Contrexeville Spa (Vosges);
etc. French stone carvers and blacksmiths were also employed by Mewes for
the facades.
Survey of London; Vol. XXXIV.
London 1900;AD Profiles 13: Gavin Stamp.