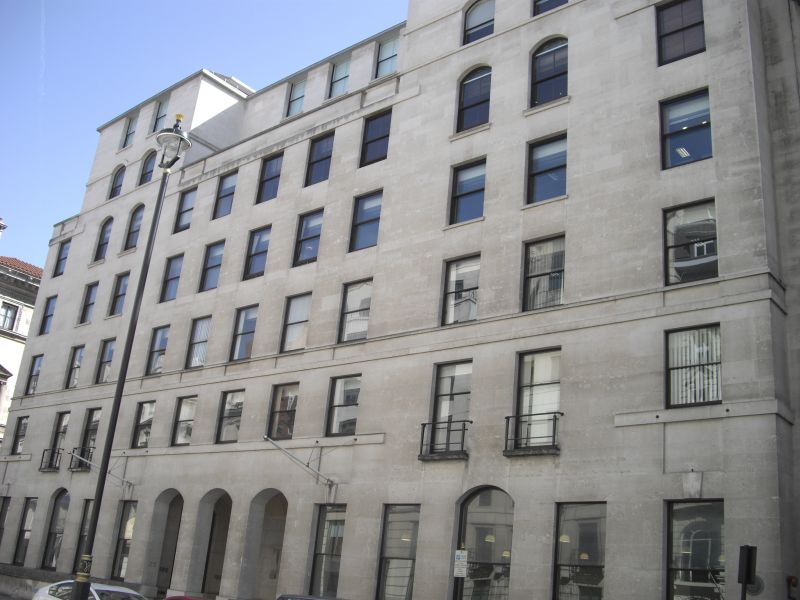 Office building, 1956-58 by Duke & Simpson, with Donald McMorran as consulting architect for the exterior, a spare yet sophisticated neo-classical interpretation of the C19 Italianate palazzo.

PLAN
It occupies a corner site, the main elevation opening onto Pall Mall, but it also faces the west elevation of the Reform Club to the east and buildings facing Carlton Gardens to the south. A symmetrical composition, rectangular on plan, set round an enclosed atrium that acts as a light well rather than being architecturally embellished. Central entrance from Pall Mall leading to rear stairs and lifts. Former banking hall, now reordered, to the north-east corner.

EXTERIOR
Prime interest resides in the quality of materials, proportion and detail of McMorran's exterior. Seven storeys, the sixth and seventh storeys treated as an attic storey; the north and south elevations in eleven bays, the east elevation in nine bays. The main elevation to Pall Mall, arranged 1:2:5:2:1, has a central entrance set back within a three-bay groin-vaulted loggia which has plain, segmental, arched openings, the rear wall similarly articulated. Entrance in a rectangular opening beneath a simple canopy bearing the number 100 and supported on robust brackets. Polished stone floor with darker slips is in part replaced to accommodate disabled access.

Plate glass sash windows in timber frames (many on the ground floor now strengthened) are mostly square-headed, but for emphasis are segmental-headed to the central bay to the right and left of the loggia at ground floor level and to the second and third bays at fourth and fifth floor level. At first floor level the corresponding bays have full-height sash windows with shallow balconies. Attic storeys within a steep mansard roof are set back between two-bay projecting pavilions which have segmental-headed niches to their outer returns. The southern elevation which faces large mansions in Carlton Gardens echoes the northern elevation but in simplified form, and has a pair of smaller entrances rather than the central loggia. The ground floor of the eastern elevation, which has been refurbished in 2012, has tall segmental-headed sashes and an entrance in the south-east corner, while the upper two storeys are treated as a continuous recessed attic storey with segmental-headed openings to the central three bays and segmental-headed niches in the end bays.

The main elevation is set behind a low parapet wall, the entrance reached by steps. Access has been modified.

INTERIOR
While the interior is not attributed to McMorran and the date of installation is not confirmed, the simplified classical form of the entrance hall is commensurate with the exterior. Central coffered entrance hall lined in buff and veined green marble and polished stone, with similar floors; (alcoves to left and right are altered and refurbished). Tall round-arched portal leads to a similarly treated vaulted rear stair hall and lift lobby. Open-well stair, to first floor also lined in polished stone with veined green marble dados and skirtings, and with bronze balustrades and brass handrails. Above first floor level, masonry stairs with steel balustrades and brass handrails, tall dados lined in grey terrazzo with flush black skirtings and dado rails. Entrances from the stairwell to the main office floors have been replaced on all but the upper floor. Offices have been refurbished throughout and are not of special interest. On the ground floor, the former banking hall has been subdivided and refitted, with an inserted mezzanine floor and does not retain any of its original fittings or finishes. The former banking hall interior is not of special interest.

100 Pall Mall, 1956-58, is an office block by Duke & Simpson, with Donald McMorran as consulting architect for the exterior, on land owned by Rudolph Palumbo. It was built on the site of the former Carlton Club, which had been destroyed by enemy bombing during World War II. It sits alongside London’s most prestigious row of C19 gentlemen’s clubs, its scale and restrained classical treatment echoing that of the neighbouring Italianate palazzi. A drawing of the proposed facade, by McMorran’s assistant, David Ancill, was exhibited at the Royal Academy Summer Exhibition in 1958.

Donald McMorran (1905-65) was a pupil of E Vincent Harris and like him was best known for his public buildings. McMorran was one of the most important architects to continue working in a sophisticated neo-classical idiom during the 1950s and 1960s, a comparison in this case can be made with work of the novocento architects such as Giovanni Muzio in Milan during the 1920s. Typically his buildings are of a very high quality throughout in terms of materials, finishes, furnishings and craftsmanship. His work ranged from projects for the University of Nottingham, of which Cripps Hall (1957-9), is listed at Grade II, to Devon County Hall (1955-64), listed Grade II*, and housing at Lammas Green (1955-7), listed Grade II. For many years he was architect to the London police forces, his buildings ranging from Hammersmith Police Station of 1939 (Grade II) to one of his last projects, Wood Street Police Station of 1963-6 (listed Grade II*).

100 Pall Mall, office building,1956-58, by Duke & Simpson, with Donald McMorran as consulting architect for the exterior, is listed at Grade II for the following principal reasons:
* Architectural interest: sophisticated, post-war interpretation of the Italianate palazzo, in the restrained neo-classical idiom at which McMorran excelled;
* Materials: high quality finishes and detail in the Portland stone facades;
* Rarity: a rare example of a commercial building by McMorran;
* Architect: McMorran was one of the most important architects to continue working in a neo-classical idiom during the 1950s and 1960s;
* Historic interest: built on the site of the Carlton Club, it was designed to sit between the distinguished C19 Italianate palazzo buildings in Pall Mall, home to London’s most prestigious row of C19 gentlemen’s clubs.