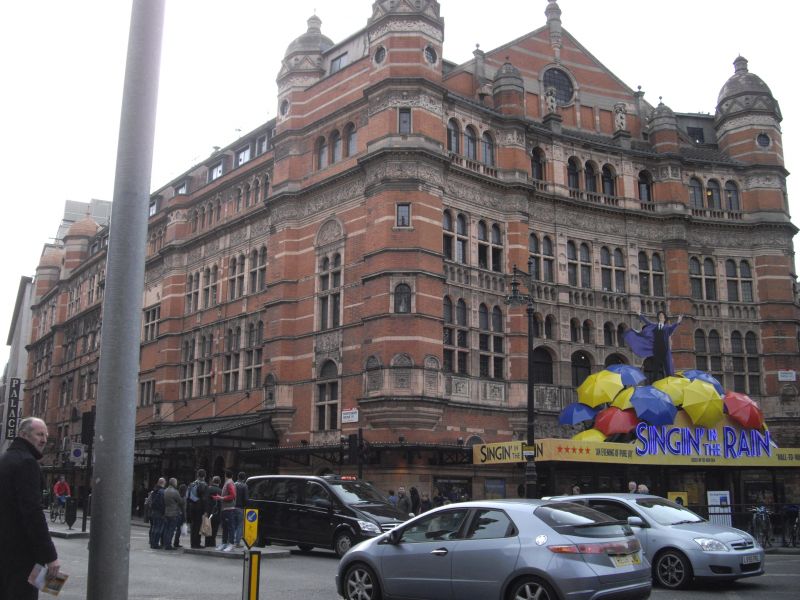 Theatre. 1888-1891 built as the Royal English Opera House by T E Collcutt and
G H Holloway for Richard D'Oyly Carte. Island site. Banded Ellistown red brick
and Doulton's buff terracotta, slate and lead roofs, in Collcutt's Norther
Renaissance manner. 4 main storeys. The slight concave front to the Circus
divided into 3 main bays articulated by octagonal corbelled corner towers and
similar inner turrets crowned by domes and with a broad banded gable over all.
Central tripartite groups of arcaded doors under glazed cantilevered canopy
returned to sides. Mullioned transomed arcaded-light windows cum loggias
designed to be opened in summer, moulded terracotta aprons, friezes and cornices.
Similar details to side elevations. Much of the rich terracotta ornament has
however been removed. Fine 3 tier balcony auditorium, its amphitheatre remodelled
by F Emblin-Walker in 1908 and with the original stage boxes removed; marble and
onyx wall claddings now painted; grand marble staircase with alabaster balusters
etc. Substantial relics of the machinery above and below stage of unique
interest in London being a mixed wood and iron system designed by Dando for the
D'Oyly Carte's elaborate opera productions. Opera having failed, it became the
Palace Theatre of Varieties in 1892; on April 10th 1910 Pavlove made her first
London appearance here; the Palace Theatre from 1911.

The Theatres of London; Mander and Mitchenson.
Survey of London; Vol. XXXIII