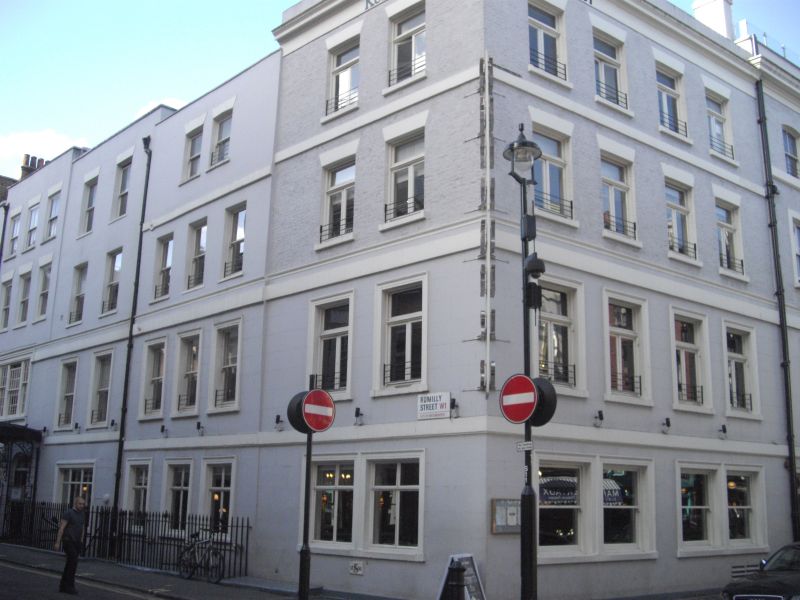 TQ 2981 SE CITY OF WESTMINSTER ROMILLY STREET, W1
58/82
18.9.75 No. 28 to 32(consec.)
(Kettner's Restaurant)
(Including Nos. 37-39
Greek Street)
GV II
Former terrace houses, now restaurant. c.1735 (late C17 fabric in part) through to
c.1768, altered as restaurant between 1868 and the 1880s. Painted brick and stucco,
concealed roofs. 4 storeys and basements. Each former house front 3 windows wide to
Romilly Street but the corner elevation and former Nos. 37 to 39 Greek Street 2
windows wide. Doorways altered to windows with early C20 canopied restaurant
entrance at No. 29. Recessed glazing bar sashes, in stucco architraves on ground
floor, but those on 2nd floor of No. 29 flush framed and some with exposed boxing,
generally under flat gauged arches except for segmental arches to 2nd floor of No.
31. Stucco plat bands except for No. 28. Parapets with copings, cornice and blocking
course to corner house and heavy cornice and blocking to former No. 39 Greek Street.
Cast iron area railings with urn finials. Interiors much altered for restaurant with
the 2nd floor of the Greek Street houses taken up by large room with Edwardian
panelling in Jacobean style, but No. 28 retains part of early C18 dog leg staircase
with slender turned balusters.
Survey of London; Vol. XXXIII.