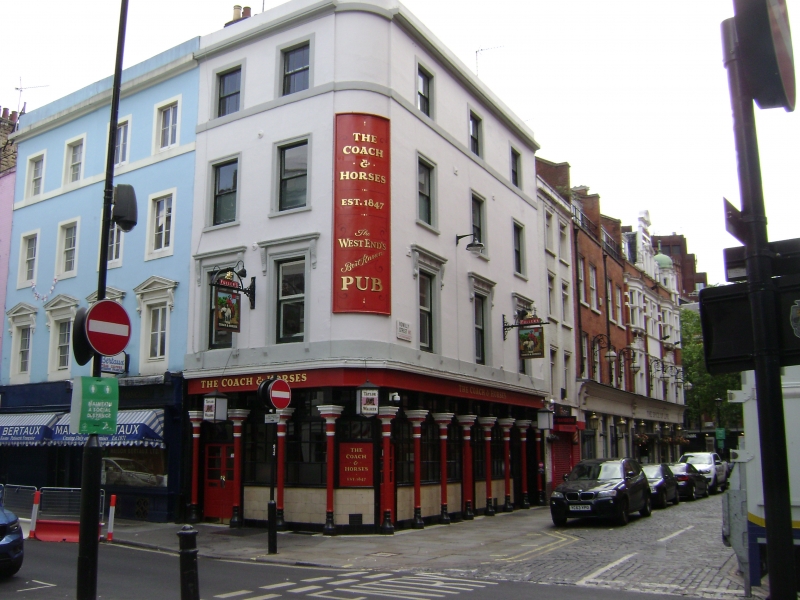 Public house, built on the site of an earlier establishment of the same name in around 1840, substantially altered in 1889 and later internally remodelled in the 1930s.

Public house, built on the site of an earlier establishment of the same name in around 1840, substantially altered in 1889 and later internally remodelled in the 1930s.

PLAN: the bar areas are divided into three spaces by a pair of central screens. Doors to the screens have been removed to open-out the interior. Each of the bars is linked by the servery, which runs along the north side. Stairs are set behind the servery leading up to the formerly domestic first-floor, which has been adapted to provide a dining area and an adjacent kitchen. Above this are residential rooms. At second and third-floor level, the eastern bay is distinct from the rest of the building with its own staircase. The cellar has the same floor-plan as the pub, save for two vaults that undersail Romilly Street (an additional vault is set to the west, although this has been blocked).

EXTERIOR: prominent corner-plot composition with a recessed curved corner treatment typical of the 1840s. Three rendered storeys above the pub frontage; two bays to Greek Street and three to Romilly Street. The sash windows to the upper floors are set in moulded surrounds, those to the first floor with a cornice and paired consoles. A moulded cornice runs above the third-floor windows and a parapet screens the half-hipped, double range roof and chimney stacks. The curved corner is marked by a recessed panel, with a later C20 signboard affixed. Further signage features on both elevations in the form of hanging boards, both bearing the Canon Brewery emblem and later painted boards (the name ‘NORMAN’S’ being used above in reference to the long-serving landlord, Norman Balon). The pub frontage is dominated by the 12 cast-iron columns. Fluted with ornamented necks and substantial square capitals, these stand proud of the set-back, multi-paned windows and the four separate bar entrances (some with embossed lettering to their glazed panels). Stall risers with cream tiles run between the entrances beneath the bar room windows.

INTERIOR: the interior of the ground floor is the product of a comprehensive scheme probably undertaken by Taylor, Walker & Co in the latter-half of the 1930s. Each of the formerly distinct bar areas are fitted with simple fielded panelling to picture-rail height. The two dividing screens are set square to the bar counter and match the wall panelling. The doors to these screens have been removed and appear to have been reused in the entrance screen to the women’s WC (built in line with post-war licensing requirements). The servery has a long counter with a tapered front and a linoleum inlay to the top. The bar back retains original shelving and continues the cornice line of the panelling, indicating it is contemporary with the rest of the work, although the back-lit signage advertising ‘Double Diamond’, ‘Ind Coope’ and ‘Skol Lager’ must have been integrated some time later (Taylor, Walker & Co were taken-over by Ind Coope in 1959, the same year Skol was launched).

The distinctions between the bar areas are subtle, though these do remain apparent. The west room was the public bar and this has an overhanging counter top, which, combined with the tapered counter and the lack of a spittoon trough here, appears to have been designed to accommodate bar stools at this corner of the servery. Drinking at the bar was generally discouraged in the smarter bar rooms in the 1930s and, correspondingly, the saloon bar has a much narrower counter top and a substantial terrazzo trough that runs around the corner at the base (this with unusual removable panels with ring-pulls for ease of cleaning). An additional degree of comfort is afforded in the saloon by the original brick fireplace at the north side of the room and meals could be sent down via a dumbwaiter which is integrated within the panelling to the east wall. The floor of the saloon was at some stage covered in linoleum, although much of this has come away to reveal cream, dark red and grey 1930s floor tiles beneath. The middle section of the pub, once dividing the public and saloon bars, served as a private bar. This section has its own entrance from Romilly Street (now blocked). At the base of the bar counter the terrazzo trough continues from the adjacent saloon bar.

The upper floors appear to have never been intended for public use (at least the awkward route through the bar servery strongly implies it was a later change). It is apparent on the upper floors that the building was once two distinct properties, with the eastern bay entirely separated by a party wall at second and third-floor level and served by its own central dog-leg staircase of around 1840, with a landing opening to a room to the front and back on both levels (not inspected). The first floor has an opening to the frontal eastern room, which serves as a kitchen. The western side contains a dining/function room, which is formed of two originally distinct domestic rooms. Several features from around 1840 are retained here, including floorboards, skirting, a fitted cupboard, a decorative plaster cornice and two simple, moulded fire surrounds with cheek tiles and cast-iron insets. Further matching features are found in the second and third floors. These floors have their original room configuration, consisting of a larger rectangular room to the corner (west) and a roughly square room to the east with the landing, a small store and the stairs to the north of this. The staircase on the west side of the building is original, retaining newel posts and turned balusters.

The history of the Coach and Horses on Greek Street can be traced back to the early C18, with a license under this name recorded from 1724. The pub occupies the corner plot at the junction with Romilly Street (named Church Street prior to 1937) and the present building was constructed in around 1840 (the pub itself announces a date of 1847, although the basis for this is not clear). At the end of the C19, during the London ‘pub boom’ years, the freehold was held by the Cannon Brewery and as part of their remodelling in 1889 the frontage was redesigned and unusual and substantial cast-iron columns were added. It appears that the pub was also extended into the neighbouring building, adding the eastern saloon bar at this time (certainly this occurred after 1875 as the pub is shown to be in its earlier form on the Ordnance Survey 1:2500 map of this date). In 1930, Taylor, Walker & Co acquired Cannon Brewery and its estate. Under their ownership the interior was thoroughly remodelled, with the three distinct bar rooms fitted-out with simple light-oak panelling, partition screens, a tapered bar counter and bar-back shelving. Some minor later alterations have been made, with a screen for the women’s WC added to the back of the saloon bar and the doors for the central partition screens removed in around 1960.

Between 1943 and 2006, most drinkers entering the Coach and Horses would be greeted (in the loosest sense) by Norman Balon, the self-proclaimed ‘rudest landlord in London’. Balon’s time in charge of the pub - recollected in his 1991 memoir ‘You're Barred, You Bastards’ - saw it come to be favoured and frequented by the writers, artists, musicians and actors of Soho: amongst the many notable regulars were Jeffrey Bernard, Francis Bacon, Lucien Freud, Peter O’Toole and John Hurt. Something of the bohemian, debauched atmosphere of the Coach and Horses was captured in Keith Waterhouse’s 1989 play ‘Jeffrey Bernard is Unwell’, with the pub’s interior faithfully recreated for the stage of the nearby Apollo Theatre. From the 1960s, the pub was also a regular meeting place for the staff of The Spectator and Private Eye, the pages of which often included references to ‘the Coach’ (not least in Jeffrey Bernard’s ‘Low Life’ column and Michael Heath’s cartoon strip ‘The Regulars’). In more recent years, the Coach and Horses’ notoriety has been sustained through its ‘naked sing-alongs’, the pub reportedly being the first and only in the country to be granted a nudist license. The decision by Fullers brewery to take over the management of the pub in 2019 made it the focus of the wider debate around the changing character of Soho and the announcement was countered with a prominent ‘Save the Coach’ campaign.

The Coach and Horses is listed at Grade II for the following principal reasons:

* as a well-composed and little-altered London corner-plot building of the 1840s, with a particularly distinctive pub frontage, integrating a series of later-C19 fluted cast-iron columns which stand proud of the bar room entrances;

*   for its well-preserved 1930s pub interior, with distinct bar areas and a range of fittings at ground-floor level and also for the range features and fixtures from the 1840s in the upper rooms;

*   as a rare example of a simple 1930s pub interior, surviving with little alteration to give a tangible sense of how it would have served at this time;

* for its particularly close association with a regular cast of prominent writers, artists, musicians and actors who frequented the pub, particularly between the 1950s and 1980s;