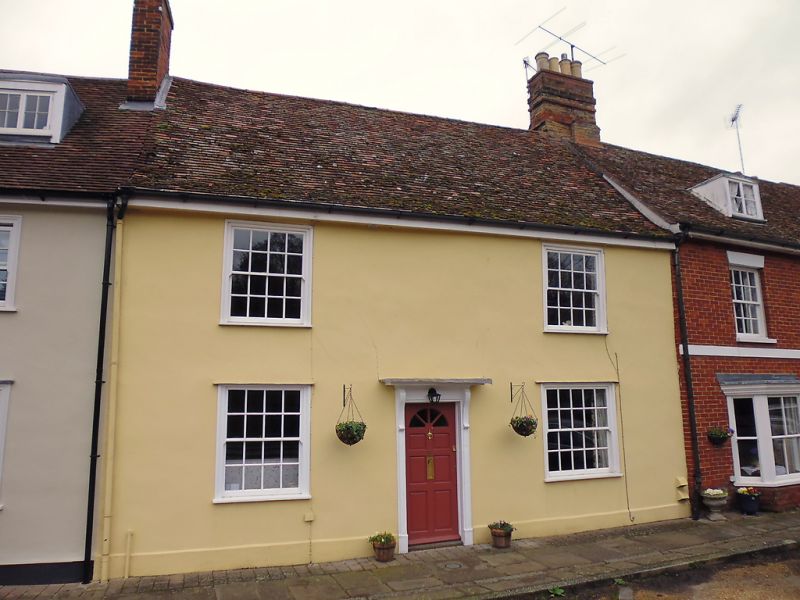 House. Early C16 with a C19 extension at the rear.
Timber-framed and rendered; old plaintiles. 2 bays; formerly
one building with No.6 (qv), adjoining on the east, with a
shared chimney-stack between them.
EXTERIOR: 2 storeys; 2 window range: 16-pane sashes in flush
cased frames. A 6-panelled central door in a plain wood
surround has a fanlight with radiating glazing-bars and a flat
cornice hood on shaped brackets. The rear extension has
walling in flint, brick and stone and a shallow-pitched slate
roof. Two 2-light small-paned casement windows, probably
originally sliding sashes, and a central 4-paned window with
lozenge-shaped panels in the glazing.
INTERIOR: to the right of the entrance, the ground-storey room
has a plain cambered lintel and rebuilt brickwork to the
fireplace. Heavy studding remains along the back wall with
housings for a 3-light diamond-mullioned window. In the room
above, a plain cambered lintel to the blocked fireplace with a
section of early C17 wall-painting beside it. This has a deep
frieze and formal patterning in rectangles enclosing
4-petalled flowers; the colours are faint, mainly brown,
yellow and red ochre.
The partition wall between the 2 upper rooms has wide
studding, a long tension brace and a blocked doorway. Similar
framing in the end wall on the left. The upper room on the
left also has studding to the back wall surviving, and
formerly had a rear chimney-stack.