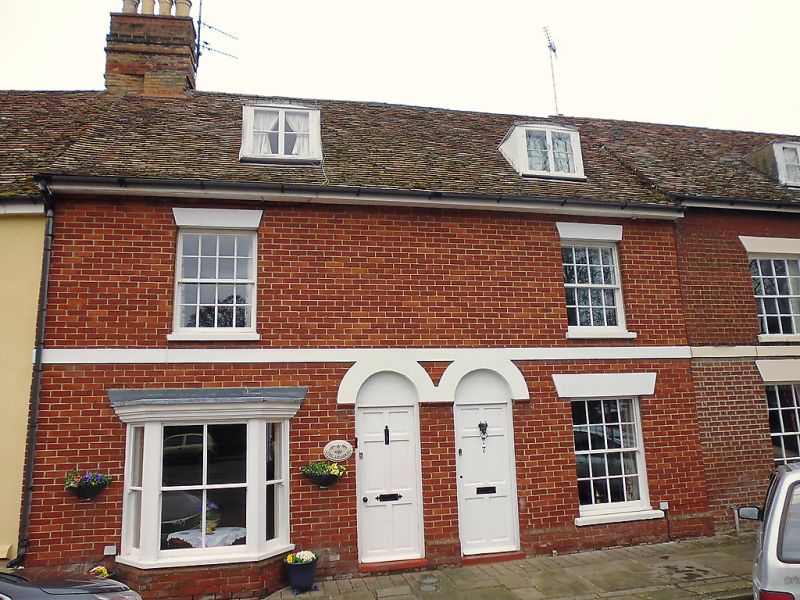 House. C16 and C17, refronted and extended in the mid C19;
exterior restored, together with No.7 (qv), in the early
1980s. Timber-framed; faced in red brick, relaid in stretcher
bond during restoration. Old plaintiles.
EXTERIOR: 2 storeys and attics; one bay. A 16-pane sash to the
1st storey with plain reveals and a flat cement arch; a
3-light flat roofed canted bay to the ground storey with
large-paned sash windows, the centre window with single
vertical glazing bars. A flat-headed lead covered dormer has a
2-light casement window. A panelled door in a plain surround
with semicircular arched cement head, and a cement band
running between the storeys immediately above the arch.
INTERIOR: although externally this house forms one with No.7,
internally it is linked with No.5 (qv). The front
ground-storey room has an exposed ceiling with heavy
unchamfered joists and evidence of a former jetty. A blocked
stair trap beside the stack, which is shared with No.5, and
has a rebuilt fireplace with a plain cambered lintel. In the
room above, the main beam is chamfered with step stops. A C17
rear extension has timbers exposed in the upper walls and
ceiling. Roofs renewed, with a shallow pitch to the rear
slope.