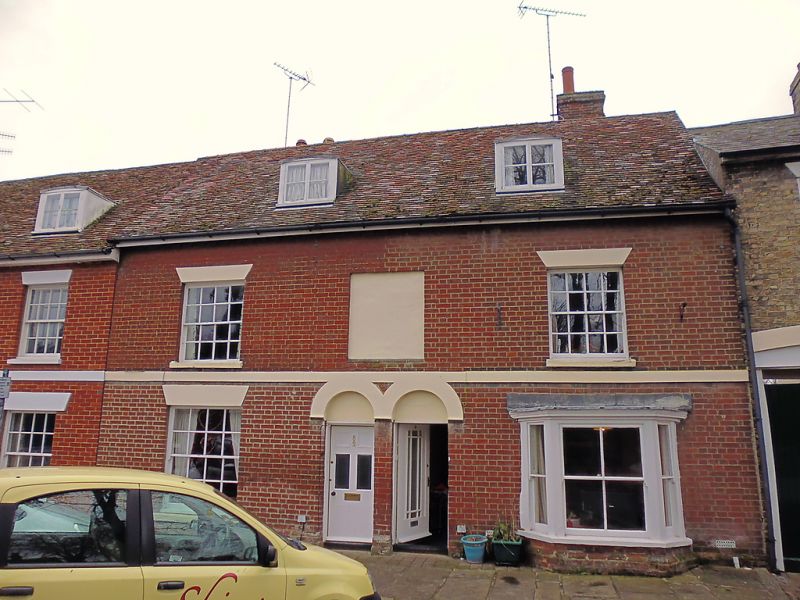 House, now divided into 2. C17 core; C19 front, restored in
the later C20. Timber-framed, fronted in C19 red brick;
plaintiles.
EXTERIOR: 2 storeys and attics. 2 window range: 16-pane sashes
in shallow reveals with stucco flat arches and stone sills.
No.8 has a similar, but slightly larger 16-pane sash to the
ground storey and No.9 has an inserted 3-light late-C19 lead
covered flat canted bay, the main window with vertical
glazing-bars only. A stone band runs between the storeys and
there is a slightly recessed rendered blank panel between the
2 upper windows. 2 segmental-headed dormers have 2-light
casement windows with horizontal glazing bars.
Paired central entrance doorways have semicircular stucco
arches and blank fanlights. 2 C20 doors. 2 rear
chimney-stacks. Although fronted in the mid-C19 in the same
style as Nos 6 & 7 (qv) the slight differences in roofline and
level indicate that this was formerly a separate house.
INTERIOR of No.8: On the ground storey a main post at the
front is evidence of a former jetty; one main post of the
original rear wall survives and a chamfered ceiling beam. In
the front upper room studding with tension braces, main beam
and wallplate are exposed. Both upper rooms have ornate
cast-iron grates. Attic with roof in 2 bays; straight collars,
rafters covered. A blocked door in the partition wall on the
east. The west wall is part of the adjoining house (No.7) with
the end of a collar purlin protruding. Access to No.9 not
possible.