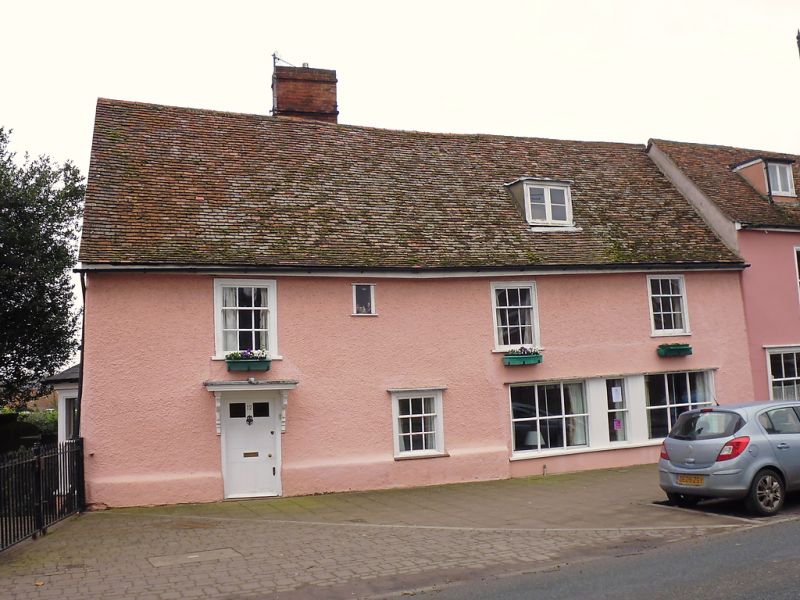 House, formerly with a shop. C16, with early C18 alterations
and an early C19 front. Timber-framed and roughcast-rendered.
Plaintiled roof.
EXTERIOR: 2 storeys and attics; frame in 4 bays. 3 window
range: 9-pane sashes in flush cased frames. On the ground
storey, 2 fixed early C19 6-pane shop windows flank a C20
window in place of the former shop door. Entrance door at one
end with 6 flush panels, the top 2 glazed; wood surround with
a lead-covered gabled C19 hood on shaped brackets.
INTERIOR: the basic frame is substantial, with heavy chamfered
cross-beams, posts with long jowls and wide studding exposed
along the east wall. Later partitions are much more flimsy
with straight braces bisecting narrow studs. The
chimney-stack, with an open fireplace and damaged timber
lintel on its east side, has no structural chimney bay and may
replace a smoke-bay. To the east of the stack a room in 2 long
bays was subsequently divided into 2; the dividing partition
now has its studding exposed and the infill removed. A later
partition in the room above has been similarly treated.
Joists to the ground-storey rooms are set on edge, some
clearly replacements. The upper ceilings appear to be
insertions. Attics boarded; roof in 6 bays with only cambered
collars exposed.