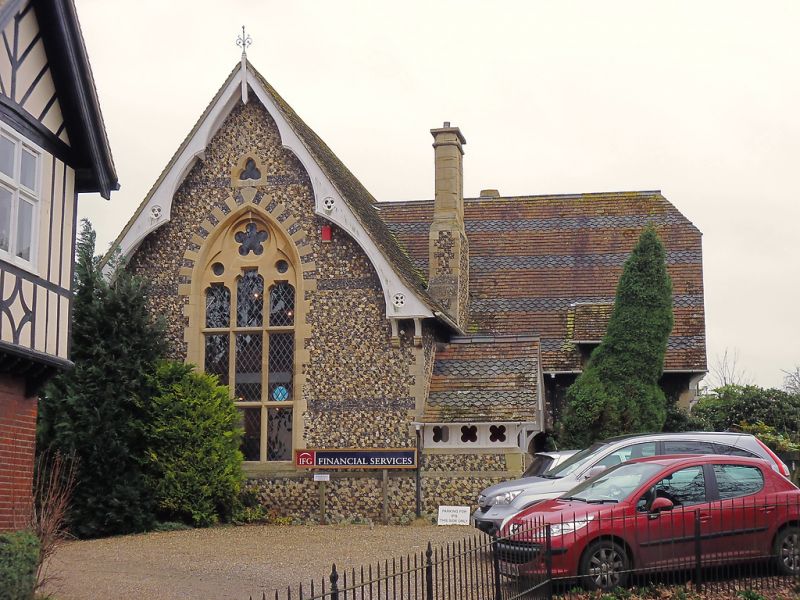 Former Infant School, now offices. Built 1872 on a site given
by the Marquis of Bristol. Walling in random knapped flint and
small stone blocks; bands of black knapped flint across the
south and west gables; stone dressings. Plaintiled roofs with
bands of black fishscale tiles. T-shaped plan.
EXTERIOR: the east-west range has a gambrel roof with pierced
and fluted bargeboards supported on heavy double brackets; the
north-south range is gabled with similar bargeboards to the
north gable and crested ridge tiles.
2 external chimney-stacks in flint and stone have rectangular
stone shafts. Long 3-light mullioned windows to the north and
west gables with heavily traceried heads; a long 4-light
window to the south gable with lighter timber mullions and
transom may be a replacement. Small cusped trefoil windows in
the apex of the north and south gables.
Entrance on the west side within a heavily timbered and partly
open gabled porch. A secondary doorway to the school yard on
the south side has a stone surround. Plank doors.
INTERIOR: divided into 2 large class rooms, both with open
timber roofs: in the larger north-south room with an arched
braced collar form and side purlins; in the smaller east-west
room with scissor bracing.