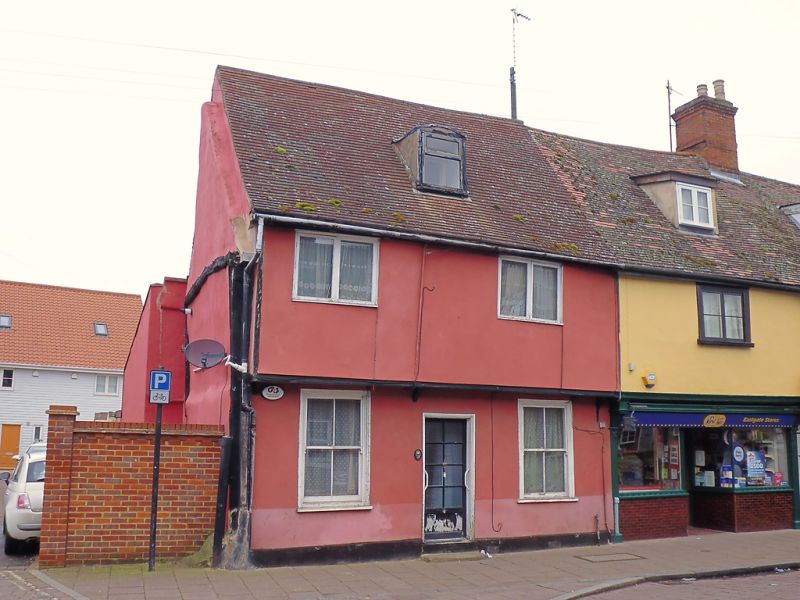 House. Late C16/early C17. Timber-framed and rendered; C20
plaintiles.
EXTERIOR: 2 storeys and attics; 2 bays, jettied along front. 2
windows to each storey: C20 plain 2-light casements to the 1st
storey and sashes in flush cased frames with a single vertical
glazing-bar to the ground storey. A segmental-headed
lead-covered dormer has a single C20 standard window with
fanlight.
Central doorway in a plain wood doorcase. Against the west
gable is the end truss of the now-demolished house which stood
to the west of No.18, with the main components of the frame
and no evidence of studding.
INTERIOR: plain timbers exposed in the ground storey ceilings.
A chimney-stack on the back wall of the eastern bay was linked
with the rear range, but has now been almost entirely removed,
apart from the lintel. Neither end wall of the house appears
to have original studding: on the west, this makes a curious
join with the former house there; on the east, a small gap
between the end cross-beam and the wall indicates that the
studding there relates to the next house eastwards. The rear
range is in 2 stages of building.