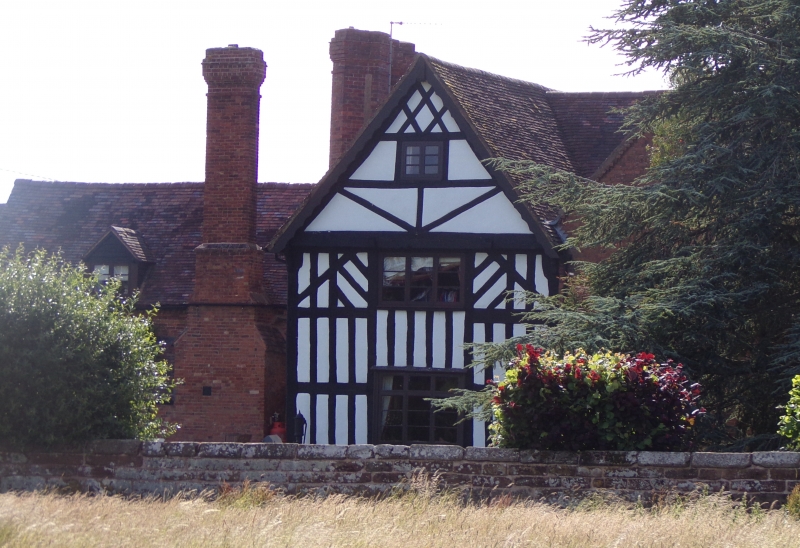 Farmhouse, now house. Late C16, altered mid-C18, c1800 and mid-C19. Part
timber-framed with rendered infill, part brick, plain tiled roofs. Former
hall with two two-bay cross-wings at north and south gable ends; the north
cross-wing was demolished in the mid-C18 and the hall in c1800 when a two-
bay brick range was added to the south side elevation of the remaining cross-
wing; during the mid-C19 a single-bay brick addition was built in place of
the former hall with wings to east and west adjoining the cross-wing; the
original cross-wing has an external sandstone chimney with four rebuilt
diagonal stacks to its south elevation, and the south wing has a large,
external brick chimney with off-sets and rebuilt stack to its rear elevation.
Two storeys, attic and cellar with cogged eaves cornice; south wing is of
one storey and attic with dormers. Framing: cross-wing has three rows of
close-set vertical studs from sill to wall-plate, the upper row at the gable
ends having some decorative panels and short straight braces at the upper
corners; the attics are jettied on a moulded bressummer and have collar and
tie-beam trusses with two collars, struts and decorative panels. West front
elevation: casement windows throughout; original gable end has a 3-light and
a single-light window on the ground floor with plank weatherings, a 2-light
and a 3-light first-floor window and an attic light; to the left is the main
entrance having a mid-C19 gabled timber-framed porch with moulded bargeboards
and finial and a panelled door. The mid-C19 addition to the left has a ground-
floor bay window and a first-floor 3-light window with a cambered head. The
south wing to the right has three 3-light windows, a rectangular light and two
doors, all with cambered heads, and two gabled dormers with 2-light windows.
Interior: stop-chamfered cross-beamed ceiling and large sandstone fireplace
on west bay of cross-wing;.also winder staircase beside chimney to south wing
upper floor. The house was occupied by the Vernon family before they moved
to Hanbury Hall in the early C18.