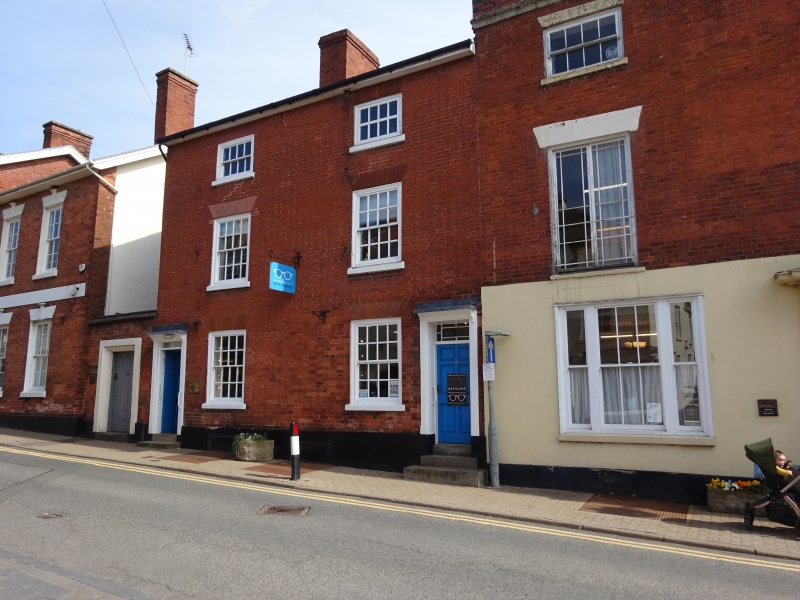 GV II
A pair of late-C18 townhouses of three storeys with cellars, and two-room depth.

MATERIALS: The principal facade is brick laid in Flemish bond, rising from a stone plinth. There are two brick chimneystacks. The north-west elevation has slate-hung tiles. The rear is coursed rubble stone.

PLAN: The building is orientated north-west south-east in line with the High Street; it is roughly square in plan. The two houses are two rooms deep with a back-to-back fireplace in each room. They are very similarly laid out but have differently-positioned staircases. There is a range to the rear of No. 34 which is mainly part of the neighbouring No. 32, but contains a small lobby.

ELEVATION: The front elevation is a symmetrical arrangement of six windows and two doors. The windows are vertically aligned, with one for each room on each floor; they have projecting cills and flat-arched lintels in brick, and the sash boxes are exposed and flush with the brickwork. The ground and first floors have eight over eight are hornless sashes; the second floor has four over four sashes. The second-floor window to No. 34 has been modified, but is similar in appearance. Both front doors have moulded architraves with shaped brackets. No. 34 has a rectangular fanlight with marginal glazing bars, No. 36 has a modern, plain-glazed over-door light. The rear elevation is asymmetrical; there is a window to each room of each floor, but those on the rear of No. 34 are off centre, due to the position of the stairway at the back of the house. There are two small windows lighting the stairway. All of the rear windows are casements with segmental arched brick lintels. Both second floor, and one first-floor window retain their original iron casements. The other windows are later, replacement two-light casements with fixed overlights.

REASON FOR DESIGNATION: Nos. 34 and 36 High Street is designated at Grade II for the following principal reasons:
* Architectural: well-preserved and attractive example of a modest pair of late-C18 town houses
* Interior: it retains historic interior features including an C18 staircase and fireplace
* Intactness: an unusually and substantially unaltered principal elevation
* Group Value: with its immediate neighbours, and many other listed buildings in the High Street