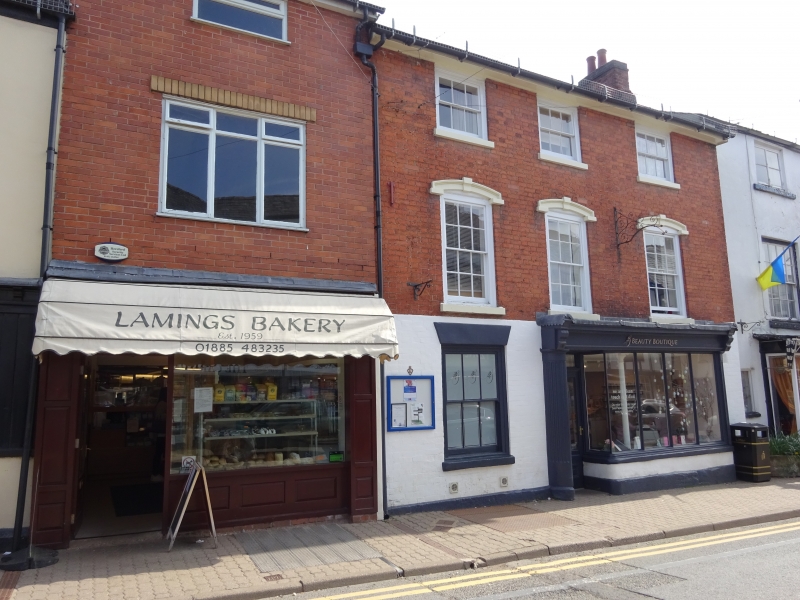 GV II
A three-storey dwelling which is an C18 remodelling of an earlier, timber-framed and jettied building.

MATERIALS: The principal elevation is a refronting in handmade red brick laid in Flemish bond. The rear is in rubble stone. It has a brick chimney stack.

PLAN: No. 50 High Street is orientated north-west to south-east in line with the road. It was originally one-room deep until a two-storey extension was added to the rear.

EXTERIOR: The road facing elevation has three bays: on the ground floor the right-hand side is now a C19 shop front with the door in the central bay of the building. The shop front has four lights separated by glazing bars, and a glazed return to the doorway, the other vertical edge of the window; and the far side of the doorway terminate in a radial fluted pilaster. There is a moulded fascia terminating in decorative, scrolled consoles. There is a low, stuccoed plinth. In the left bay is a three-over-three horned sash window in a recessed opening with projecting cill. The first and second floors have a window to each of the three bays: six-over-six on the first floor and three-over-three on the second. All are hornless sashes with their frame boxes flush with the façade, and projecting cills. Those on the first floor have keyed, moulded pediments. Those on the second floor meet the soffit of the overhanging eaves. The arrangement of the windows is asymmetrical. The rear elevation has evidence of raising of the eaves.

INTERIOR: The interior was not inspected for the purposes of this assessment, but this description has been informed by the Insight Historic Buildings Research report (2009). There are some C18 features remaining, such as doors with fielded panels. There is evidence to suggest the building was timber framed and jettied at the first floor, although it is illegible and fragmentary.

HISTORY: Bromyard is a small market town that was first recorded in circa 840. No. 50 High Street is situated on one of the principal thoroughfares in the town which was known as Novus Vicus in the late C13 and recorded as Newe Streate in 1575. The street appears to have been fully built up by the early C17, though some of the plots have been re-developed since that time.

No. 50 High Street has evidence to show it was once a timber framed building. It was extensively remodelled in the C18, removing much of the evidence of the earlier timber-framed structure. The remodelling included raising the eaves and refronting the road facing-elevation. In the C19 a shop front was added to the right-hand side of the ground floor. A sash window was inserted into the bay to the left. It is unclear how the ground floor was previously arranged.

REASON FOR DESIGNATION: No. 50 High Street, an C18 remodelling of an earlier building, is designated at Grade II for the following principal reasons:
* Architectural interest: a good example of a well-preserved C18 façade with finely-detailed C19 shop front
* Intactness: a substantial proportion of the pre-1840 fabric is extant
* Group value: the building forms part of a strong grouping of listed buildings on the High Street