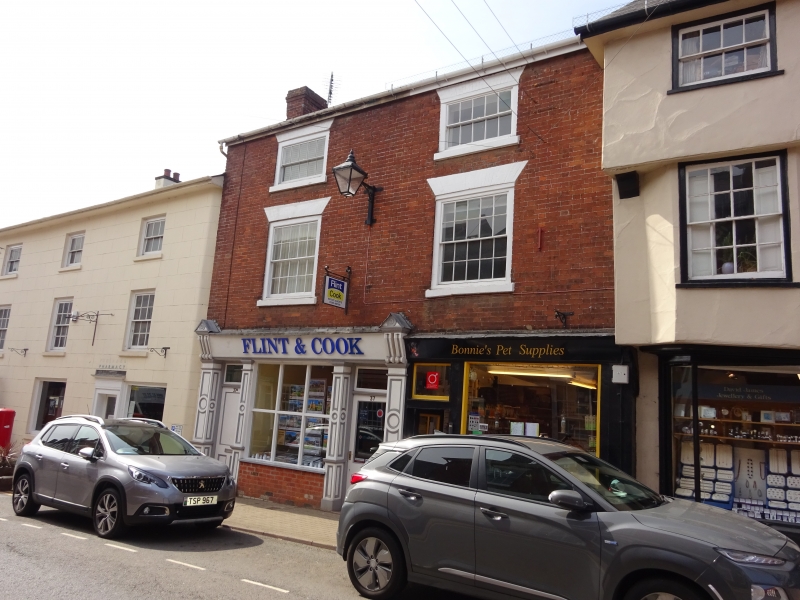 GV II
A multiphase, single building of the C18 and C19, with an earlier core. It is now divided into two properties with domestic accommodation above shops.

MATERIALS: the street facing elevation is brick, the rear is coursed rubble stone. There are remnants of an earlier two-storey, timber-framed building. There are brick chimney stacks at either side of the building.

PLAN: the building is orientated north-west south-east, parallel with the High Street. The first phase is a one-room deep, three-storey building. This was then extended to the rear, firstly with a single storey, and later heightened to form a two storey range.

FAÇADE: the principal elevation is brick laid in Flemish bond. It is symmetrical at first and second-floor level. There are two hornless-sash windows on both storeys; the frame boxes are flush with the brickwork; they have projecting cills and flat arches of rubbed brick. On the first floor they are ten over ten, and on the second floor five over five. On the ground floor are two shop fronts, the left-hand side of which is wider, with its doorway positioned at the centre line of the building. This suggests, prior to conversion, the ground floor may have been a symmetrical arrangement with a central doorway. The left-hand side C19 shop front is an extravagant, symmetrical arrangement with a doorway either side of a six-light central, glazed section. There are panelled pilasters dividing the sections; those at the edges of the frontage support double consoles surmounted by pediments. There is a plain fascia between the consoles. Both doors have plain glazed rectangular fanlights and panelled soffits: the door on the left is panelled and half glazed; the one to the right has matching panelling but is solid. The right-hand side shop front is a plainer arrangement with a large glazed panel, a door with rectangular fanlight, and plain fascia. The rear elevation has been variously built upon but retains some C19 casement windows.

INTERIOR: the three-storey, one-room phase of the building has a C18 king-post roof structure, with some C19 modifications to create a hipped north-west end. It contains reused timbers. The rear range has evidence of being heightened from one, to two storeys; the roof of this section also includes reused, early material. Within a cupboard on the north-west corner of No. 39 is a large, flared, chamfered jowl post. It is at first-floor level and would have supported a tie beam of an earlier, two-storey structure. Its size and shape suggest it could be of C16 date. Within No. 39 are a number of historic features, including C18 doors and a C17 cupboard.

HISTORY: Bromyard is a small market town that was first recorded in circa 840. Nos. 37-39 High Street is situated on one of the principal thoroughfares in the town which was known as Novus Vicus in the late C13 and recorded as Newe Streate in 1575. The street appears to have been fully built up by the early C17, though some of the plots have been re-developed since that time. Nos. 37-39 High Street is described in the statutory list as dating from the early C19.

REASONS FOR DESIGNATION:
Nos. 37-39 High Street is designated at Grade II for the following principal reasons:
* Architectural: a well-preserved example of an C18 urban building with a much earlier core
* Architectural: an elaborate and embellished, classically-styled Victorian shop front
* Intactness: a substantially intact C18 facade with later shop front
* Group Value: with its immediate neighbours and many other listed buildings in the High Street