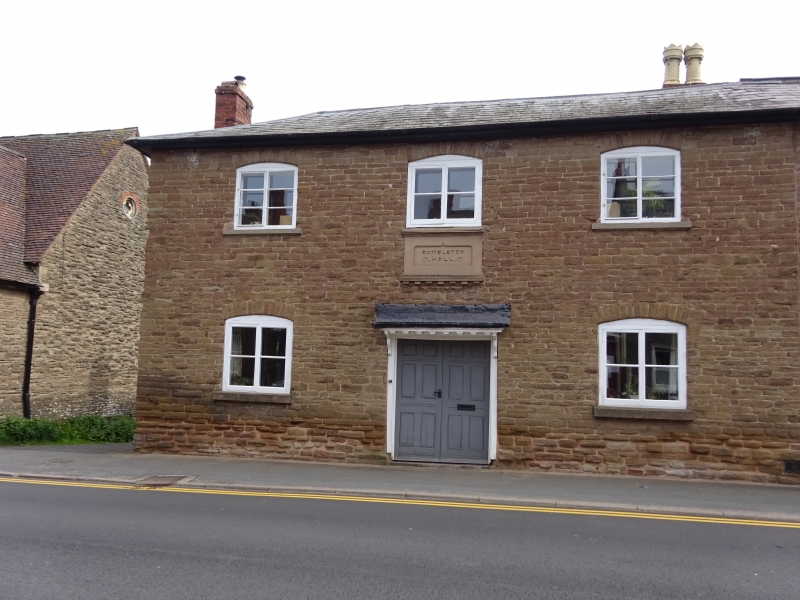 GV II
An attached town house, dating from the C17 and much altered later.

MATERIALS: the house is constructed from stone, squared and brought to course, under slate roofs with brick stacks.

PLAN: it is L-shaped on plan, with the main range to the road running north-south, and a further wing running east-west from the northern end.

EXTERIOR: the house is of two storeys and cellar, and has a symmetrical, three-bay front to Church Street. The windows are two-light, multi-paned timber casements, set in segmental-headed openings flanking the central doorway, with another similar example to the central bay of the first floor. The windows have stone cills. The wide central doorway, housing narrow double doors, is set under a dentil hood. Above it an inscribed panel reading DUMBLETON / HALL is set into the wall. The shallow-pitched roof is hipped to the north, and has stacks to either end, that to the south having two C19 decorative chimney pots.

INTERIOR: a room to the rear of the first floor contains an Adam-style fireplace. The cellar houses two cells with barred roofs and an original window with chamfered jambs, square heads and iron bars, dating from the building's use as a court house.

HISTORY: Bromyard is a small market town that was first recorded in circa 840. No. 26 Church Street (formerly known as Dumbleton Hall) is situated on one of the principal thoroughfares in the town, adjoining the church with the market square. It continues south into Sherford Street, and together they were known as Verterus Vicus in the late C13 and recorded as Shurford Streate in 1575. This central area of the town to the south of the church and around the market place appears to have been fully built up by the early C17, though some of the plots have been re-developed since that time. No. 26 Church Street is described in the statutory list as dating from the C17; it has undergone significant alterations, principally in the C18 and C19. The building was used in the C19 as council chambers, a police station and a magistrates' court, in connection with which use two cells were created in the cellars.

REASONS FOR DESIGNATION: 26 Church Street is designated at Grade II, for the following principal reasons:
* Architectural interest: the building is a handsome town-house, originating in the C17 with alterations in the C18 and later
* Historic interest: it served as the town's magistrates' court and council chambers, and retains cells built in the cellars
* Group value: with the numerous other listed buildings in Church Street