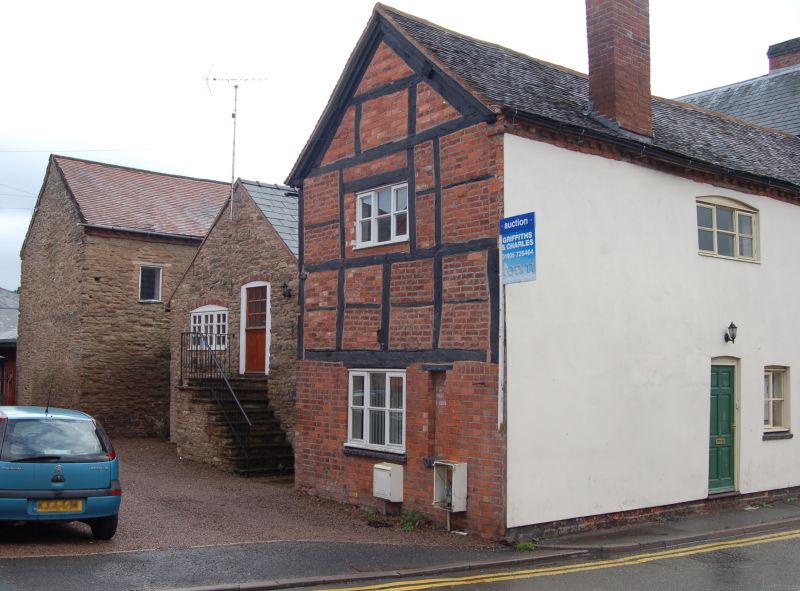 MATERIALS: The principal facade is in red brick. Rear ranges have some exposed timber framing with brick infill, and some rough stone elevations. The roof is slate and there are brick chimney stacks.

EXTERIOR: The Cruxwell Street facade has three storeys and three bays. The windows are aligned and the door is to the right of the central window. The ground-floor windows have large fixed arched lights with three casements above. At first-floor level there are two-over-two sashes, and at second-floor level three-over-three. The front door is solid with six fielded panels with a rectangular over-light with marginal glazing bars. There is a moulded door case with fielded panels to the return, it has a moulded cornice with scroll corbels. There is a ceramic tile to the left of the front door.

The Tenbury Road elevation is three storeys on the main range to the right, and two storeys on the rear gabled range. At ground-floor level there are two windows of the same style as the front, and a modern casement to the left. There are two six-light windows at first-floor level, with central fixed panes and casements either side. Most of the road-facing elevation of this rear range is rendered.

The rear elevation consists of two gables; that to the right has an exposed timber frame with brick infill to the upper level. The left-hand gable is in rough stone and has steps up to a first-floor entrance.

There is a dentil cornice below the eaves on the two road-side ranges.

HISTORY: Bromyard is a small market town that was first recorded in circa 840. No. 1 Cruxwell Street is situated on one of the principal thoroughfares in the town, which runs east from the vicarage and church. It was known as Corkeswalle Vicus in the late C13 and recorded as Croxewalle Streate in 1575. To the west, where it meets Old Road, it was and was known as Sheep Street in the early C20. This central area of the town to the south of the church and around the market place appears to have been fully built up by the early C17, though some of the plots have been re-developed since that time.

No. 1 Cruxwell Street has origins in the C17. It appears it was originally a rectangular two-and-a-half-storey dwelling which was then extended to the rear with perpendicular gabled ranges, and was refronted with brick in the C18. There are records referring to a public house on the site as early as 1669 and it remained in use as such until the late-C20 before being converted to domestic use.

REASON FOR DESIGNATION: No. 1 Cruxwell Street is designated at Grade II for the following principal reasons:
* Architectural interest: an attractive and well-proportioned facade with good-quality brickwork, and historic fenestration and door case
* Early date: a C17 building with later refronting and extension, and operational as a public house from the C17 until the late C20
* Group value: it has group value with both neighbouring listed buildings and those elsewhere in the street scene