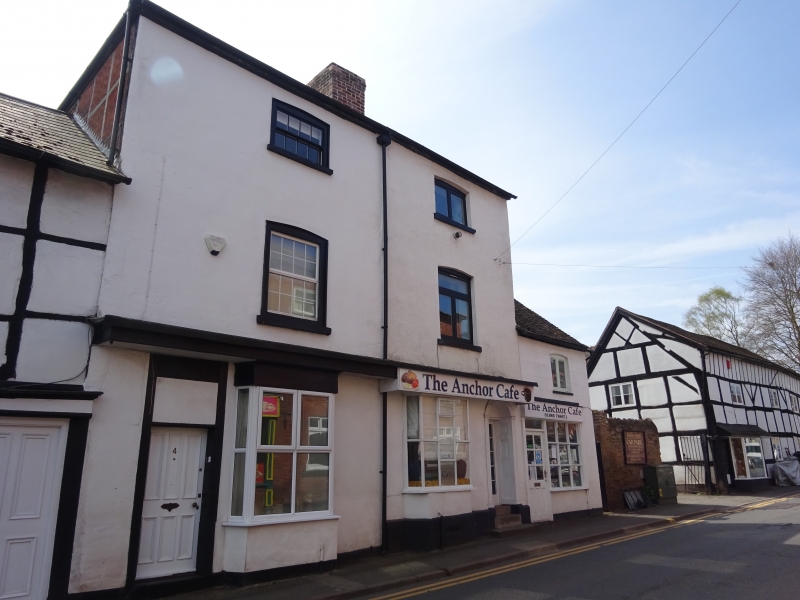 GV II
Originally a single dwelling with C18 origins, now subdivided and extended with a cafe in No. 2 and domestic accommodation in No. 4.

MATERIALS: There is some timber framing with brick infill, and rendered rough stone to the front and side elevations; the rear was not inspected. The roof is slate with central brick chimney stack. The building consists of a two-bay, three-storey range and a two-storey single bay range to the west, both are pitched and aligned roughly east-west, parallel with Cruxwell Street. There are extensions to the rear.

EXTERIOR: The principal facade, which is rendered and painted, is of two distinct sections: the three-storey main range, and the two-storey extension. The main range, divided in half, has, at ground-floor level, two canted bay windows beneath a hood, which is of slightly different depth on each side. No. 4, on the left has a modern window and a fielded-panel, solid door. No. 2 has a large glazed window with staggered glazing bars; there is a moulded doorcase with fielded panels to the return, and an arched head. There is a window on each bay on each floor; those on No. 4 retain their sash windows, which are eight-over-eight at the first floor and four-over-four on the second floor. All have projecting stone cills.

The two-storey extension the right is one bay and has the same shaped window opening on the first floor. On the ground floor is a nine-light shop window, a fielded panel door with six lights on the top half. There is a plain fascia.

INTERIOR: Not inspected. However, internal reordering is evident; the café occupies the ground floors of the extension and the right-hand side of the main range.

HISTORY: Bromyard is a small market town that was first recorded in circa 840. Nos. 2-4 Cruxwell Street is situated on one of the principal thoroughfares in the town, which runs east from the vicarage and church. It was known as Corkeswalle Vicus in the late C13 and recorded as Croxewalle Streate in 1575. To the west, where it meets Old Road, it was and was known as Sheep Street in the early C20. This central area of the town to the south of the church and around the market place appears to have been fully built up by the early C17, though some of the plots have been re-developed since that time.

Nos. 2-4 Cruxwell Street dates from the late C18. It was initially a single range which was extended to the east in the C19. There have also been various extensions to the rear.

REASON FOR DESIGNATION: Nos. 2-4 Cruxwell Street is designated at Grade II for the following principal reasons:

* Architectural interest: it has a modest, well-proportioned facade
* Historic interest: it pre-dates the 1840 threshold and retains its historic plan form
* Group value: it makes a positive contribution to the street scene and has group value with neighbouring listed buildings