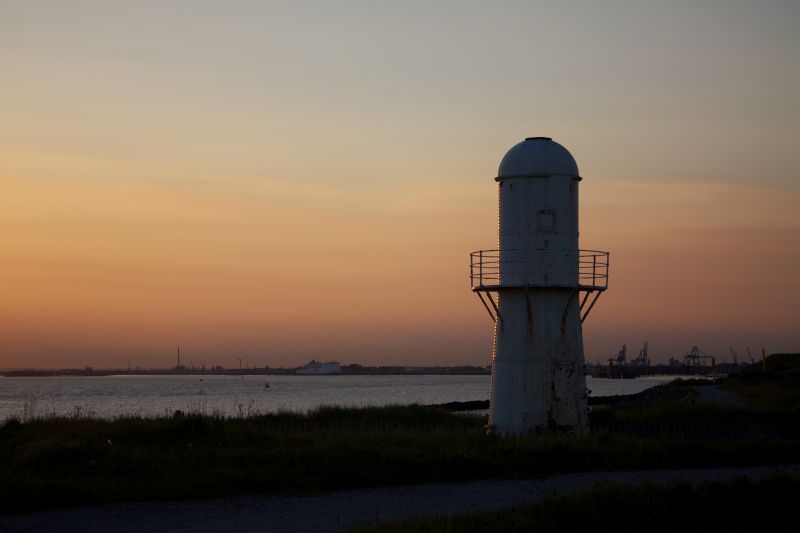 GV II
Lighthouse. 1870 for Trinity House; later attached to base. Brick and
flagstone base with iron rails carrying tower with rivetted wrought-iron
frame, casing and balcony; painted white. Base rectangular on plan,
approximately 2 metres high, with flagstone top carrying pair of rails on
bolted brackets. Flight of wooden steps up to lighthouse door on south
side. Lighthouse: tapered round tower, of 2 stages, approximately 10 metres
high, with square concrete plinth fixing it to base. First stage has low
door with strap hinges, projecting rectangular window above. Upper stage
has angle struts supporting cast-iron balcony with plain railings, small -
door with strap hinges, and small projecting square window above, large -
projecting square window to north. Gutter, domed cap with cylindrical
ventilator. An unusual and innovative design; the tower originally moved to
establish a new line for approaching vessels to follow between Paull and The
Hebbles. One of the series of Humber Estuary Lights which included
lighthouses at Spurn Point, Easington parish (qv), and South Killingholme
(qv) on the south bank. Together with the neighbouring High Lighthouse to
the south (qv), and others at Salt End (now removed), it replaced the
lighthouse at Town End Road, Paull (qv). Still in operation. D Jackson,
Lighthouses of England and Wales, 1975, p l05.