A Grade I Listed Building in Spotland and Falinge, Rochdale 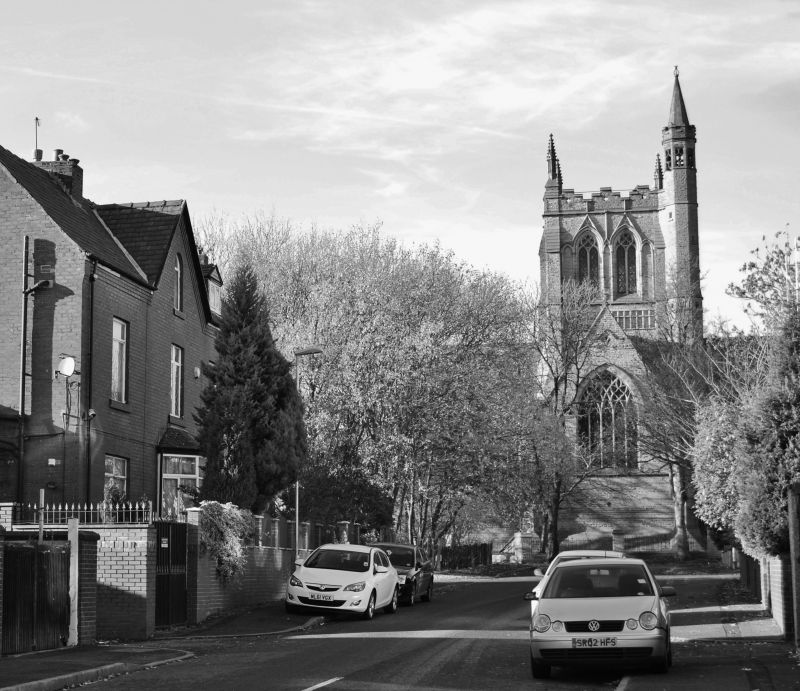 MATERIALS: Irregularly coursed sandstone rubble with occasional bands of red sandstone, ashlar dressings, slate roofs. Gothic revival style with hints of Arts-and-Crafts detailing.
PLAN: Latin cross with large, square crossing tower with staircase and bell turret to north-east corner, short, wide aiseless nave with west porch and west gallery reached by semi-circular stair turret in north-west corner, wide transepts, that to the south with a porch, chancel with Royds chapel to south and vestry to north.
EXTERIOR: The church is built on a deep battered plinth, with stepped buttresses, and deep slate roofs with ashlar copings and gable finials resonant in Freemasonry symbolism. The nave is of three bays with square-headed one, two and three-light windows with highly individual Decorated and Free Gothic tracery and hoodmoulds. The west windows have blank panels relating to the gallery within. The west gable wall has a rose window above the projecting porch, which has a raked parapet and raked blind arcading with two traceried mandorlas to each side lighting the flight of steps within rising to the raised floor level. The porch entrance has a flattened ogee opening with a cusped panel above containing a relief carving of the martyrdom of St Edmund set in a mandorla. In front of the double wooden doors are hung decorative iron gates. The semi-circular north-west stair turret is castellated, with a small turret with spire to the west side. The transepts are of two bays with similar square-headed windows in the west elevations and outer bay of the east elevations. The north transept gable has three lancet-shaped windows. The outer, one-light windows have star tracery. The central two-light window is taller and in two tiers. Beneath is a relief carved panel commemorating the founder's parents, Clement and Jane Royds. The pointed-arch window in the south transept gable is of three lights with quatrefoil tracery above. It is flanked by narrow bands of relief foliate carving. The projecting south porch is similar to the west porch, though with one and two-light windows in the side walls. The porch entrance has a pointed arch opening. In front of the double wooden doors are hung decorative iron gates. The crossing tower has angle buttresses which become clasping and diagonal at a lower level, with a projecting octagonal stair turret to the north-east corner. Each face has square-shaped blind arcading, two large two-light geometrical traceried windows interspersed with blind arches, crocketed banding and decorative crenellations with crocketed corner pinnacles. The stair turret has a traceried bell-stage and small spire.
The chancel is of two bays with stepped diagonal corner buttresses. The north wall has a similar square-headed, one-light window. The pointed-arch east window is of five lights with Decorated tracery, carved voussoirs of alternating colours and hood mould. The chancel roof is steeply pitched and of the same height as the nave roof. The north vestry is of one bay with a lower, double-pitched roof. It is approached by a flight of steps and a cusped doorway in the north wall. The east gable wall has three lancet-shaped windows in two tiers, the central light being taller. The Royds chapel if of three bays with a lower, double-pitched roof. The entrance doorway in its south wall is flanked by columns with moulded bases and unusual diagonal moulding above the pointed arch with a relief carving of the family coat of arms. There are three square-headed, single-light windows in the south wall and a similar larger, three-light window with double triangle, or Seal of Solomon, tracery in the east gable wall. A narrow ashlar band above has the relief-carved inscription SEMPER PARATUS.
INTERIOR: the interior is designed around the geometric form of a cube, two for the nave, one apiece for the crossing, chancel, and transepts, and the seventh cube being the volume of the crossing tower above the inserted ceiling.
The church is entered by either the west or south porches, both of which offer an initially restricted view created by the west gallery and organ case structure respectively, before emerging into the main church body. The weight of the crossing tower appears to be carried on four massive polished granite columns with moulded stone capitals, bases and mid-point bands. The lantern, which would have flooded light into the centre of the church, is no longer visible having been enclosed in 1911. The chancel and Royds chapel have irregularly coursed ashlar stone walls, with a three-bay arcade between the two of polished granite columns with particularly finely carved foliated capitals, and patterned woodblock flooring. The nave and transepts have plastered walls with stone flags. The roofs are a tour-de-force of massive joinery, particularly the chancel roof with exaggerated hammerbeams decorated with foliate carving and notching, which spring from individually foliated stone corbels with granite shafts. A complete scheme of stained glass (excepting the south transept window which held a Te Deum, exhibited in Vienna in 1887) exists by Laverns, Barrand and Westlake, with a Building theme on the south side, including scenes of Noah's Ark and the Tower of Babel, and a Sacrifice theme on the north side, including Abraham and Isaac, and the Last Supper. The climax of the theme is in the Royds chapel, where the east window depicts Nehemiah, Ezra, the Masonic Tyler wielding a sword, and the Building of the Temple in Jerusalem with a likeness of Albert Hudson Royds as one of the master masons. The chancel east window has tiers of scenes from the Life and Passion of Christ and is dedicated to the memory of Albert's three brothers who died in 1838, 1865, and 1871. Above is a small window shaped as a stained glass All-Seeing Eye.

The chancel has a stone reredos of the True Vine by Earp, which is integral with the stone of the building and grows out over the architecture. It is deeply cut, with the words I AM THE emerging from the foliage. In the north wall is an exaggerated ogee-headed doorway into the vestry, with hood mould and foliate carved spandrels. To the left is a dedication brass by the Revd E W Gilbert, using a variety of fonts and letter sizes, and to the right is a carved piscina dated 1896 in memory of Charles Norris, a vicar. The choir stalls have pierced quatrefoils.

In the north-east corner of the crossing is an open tracery hexagonal oak pulpit on a square stone base with columns. In the south-east corner of the crossing is a lectern donated by Clement, the founder's son, in 1871. On an imperfect block of dark stone stands a perfect white cube of ashlar, supporting three brass columns; Doric, Ionic, Corinthian. Engraved on their bases are the symbolic tools of the Masonic Craft. On top is a horizontal brass tray, fretted with pomegranates, lilies, and intertwined snakes, and to carry the bible is a pyramid formed out of set-squares and compasses.

The nave has a heavy, timber west gallery, with a modern light-weight screen erected beneath the balcony. The north transept contains a white marble font dated 1871 with a round bowl carved with the symbols of the Evangelists set on clustered columns at the base and supported by four angels kneeling on the capitals of clustered columns. The south transept contains the organ with two tower cases flanking the gable window and entrance doorway. The nave, transepts and Royds chapel have contemporaneous pews with carved ends.

SUBSIDIARY FEATURES:
The diamond-shaped churchyard is bounded by a coped stone wall with stone piers and iron railings, and moulded gate posts with trefoil decoration and iron gates.

HISTORY: St Edmund's Church was funded by Albert Hudson Royds in memory of his parents, Clement and Jane Royds, who had lived at the nearby Falinge Hall, Rochdale. The Royds family were a prominent local family of wool merchants who had helped finance the Rochdale canal, and owned a local bank called Clement Royds and Co. Albert was a prominent Freemason, Deputy Provincial Grand Master of the East Lancashire Lodges of Freemasons (1856-66), before assuming the same role when he moved to Worcestershire, and latterly Provincial Grand Master of Worcestershire. His Freemasonry had a huge influence upon the design of St Edmund's.
The Taylors were responsible for designing a number of churches in the north-west, many of which are listed. They include a group of five in Rochdale of which St Edmund's was the last; the others are All Saints' Church, Foxholes Road, 1865 (q.v), St Mary's Church, School and Vicarage, Oldham Road, 1865 (q.v.), St Peter's Church, St Peter's Street, 1868 (q.v.), and the Church of St John the Evangelist, Market St (1871). The design is acknowledged by many to be James Medland Taylor's masterpiece, and was influenced by the brief from Royds, and also the design input of the first incumbent, the Revd E W Gilbert, artist and Freemason.
St Edmund's Church cost £22,000-£28,000 at a time when a decent church could be built for £4,000. Thomas Earp, the London architectural sculptor, produced the carvings, font, and reredos. He also provided significant amounts of sculpture at Rochdale Town Hall (q.v.) and Rochdale's medieval parish church, St Chad's Church (q.v.) at this period. The reredos and dedication brass were designed by the Revd E W Gilbert. The scheme of stained glass was by Lavers, Barraud & Westlake, and the church organ was manufactured for the church in 1871 by the leading organ builders William Hill & Son., who also built an organ for Manchester Cathedral in the same year. The ornamental iron doorway gates were designed by Messrs Hart, Beard & Co of London.
In 1887 J Murgatroyd advised that the crossing lantern be ceiled to combat complaints about down-draughts, though this does not appear to have been implemented until 1911. the Royds chapel was converted into a children's chapel in the early C20, before being rededicated as a memorial chapel after World War II, with the children's chapel being relocated to the north transept, and the font was then also moved into the north chapel.

REASONS FOR DESIGNATION
St Edmund's Church, Edmund Street, Rochdale, is designated at Grade I for the following principal reasons:
* Design: Gothic revival and Masonic symbolism are merged to create a building which is both a successful parish church and a temple to Freemasonry
* Architect: James Medland Taylor is a highly individual and inventive architect with a number of listed churches including the Grade I St Anne's Church, Denton
* Rarity: the completeness of the scheme and all-encompassing nature of the Masonic symbolism, apparent in both the dimensions of the church and its detailing and embellishment, is unparalleled in an English context
* Historic Interest: as a record of the strength of Freemasonry in the north-west and Rochdale in particular in the late C19
* Decorative quality: the church is a tour-de-force of high-quality craftsmanship. Highlights include: the foliate stone carving of corbels and capitals, vine reredos, and white marble font by Thomas Earp, the roof joinery (notably the highly elaborate hammerbeam chancel roof), and the complete stained-glass scheme by Lavers, Barraud & Westlake.