A Grade I Listed Building in Milkstone and Deeplish, Rochdale 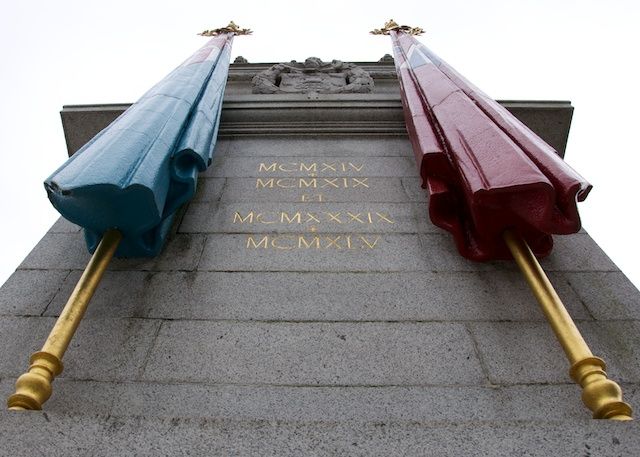 DESCRIPTION: the memorial stands in Memorial Gardens, in front of Rochdale Town Hall. The cenotaph and Stone of Remembrance stand on a broad rectangular dais of three equal steps.

The cenotaph, c10m tall, stands on a further six steps. It comprises a rectangular pier which recedes as it rises to a tall, narrower pier with stout semi-columns to the north-west and south-east sides. The abacus carries a further plinth which supports a catafalque bearing a draped recumbent figure. Against the upper plinth rest carved wreaths enclosing the arms of Rochdale. From the lower plinth project four carved, painted, flags. On the south-west side are the Union Flag (left) and White Ensign (right); on the north-east side the RAF Ensign (left) and Red Ensign (right). The flagpoles finish in decorative pinnacles which are encircled by laurel wreaths.

The inscriptions are carved into the narrower pier:

This latter dedication is a quotation from the Book of Samuel chosen following an appeal in the Rochdale Observer. A later bronze plaque beneath reads TO ALL THOSE WHO DIED/ IN THE/ SERVICE OF THEIR COUNTRY.

To the south-east of the cenotaph and facing the Town Hall, a Stone of Remembrance is raised on three steps rising from the dais. Inscribed on the stone is THEIR NAME LIVETH/ FOR EVERMORE. All the lettering on the memorial is gilded, as are the flagpoles and flag wreaths.

The great wave of memorial building after the First World War resulted in thousands of commemorative monuments being raised both at home and on the battlefield. Lutyens was the most outstanding designer to work in this field. This is one of eight cenotaphs in England designed by Lutyens. The earliest to be erected was at Southampton in 1920; the latest at Norwich, in 1927.

A public meeting in Rochdale on 10 February 1919 decided that there should be a physical memorial to commemorate the war as well as a fund to provide for the dependents of servicemen who had been killed or disabled. Lutyens was duly appointed as architect and prepared an unusual scheme for a war memorial bridge across the River Roch (which was then open but is now culverted) in front of the Town Hall. The centrepiece would be a Stone of Remembrance with a statue of a recumbent soldier on a bier on either side. However Alderman William Cunliffe (a former mayor of Rochdale) purchased Manor House, a C18 building, on the opposite side of the river from the Town Hall, which he then donated for the construction of a suitable memorial. This had a particular resonance because Manor House had been used as a recruiting station during the War.

Lutyens prepared a new design for a cenotaph and Stone of Remembrance (which he had originally designed for the Imperial, now Commonwealth, War Graves Commission). Manor House was demolished, and the memorial was built by Hobson Ltd of Nottingham at a cost of £12,611, out of a total fund collected of £29,443 10s. It was unveiled by the Earl of Derby on 26 November 1922 and dedicated by the Archdeacon of Rochdale.

Inscriptions commemorating the fallen of the Second World War were added at a later date.

Sir Edwin Lutyens OM RA (1869-1944) was the leading English architect of his generation. Before the First World War his reputation rested on his country houses and his work at New Delhi, but during and after the war he became the pre-eminent architect for war memorials in England, France and the British Empire. While the Cenotaph in Whitehall (London) had the most influence on other war memorials, the Thiepval Arch was the most influential on other forms of architecture. He designed the Stone of Remembrance which was placed in all Imperial War Graves Commission cemeteries and some cemeteries in England, including some with which he was not otherwise associated.

Rochdale Cenotaph, situated in Memorial Gardens, is listed at Grade I for the following principal reasons:
* Historic interest: as an eloquent witness to the tragic impacts of world events on this community, and the sacrifices it made in the conflicts of the C20;
* Architect: by the nationally renowned architect Sir Edwin Landseer Lutyens (1869-1944), who designed 58 memorials at home and abroad including the Cenotaph in Whitehall;
* Design quality: an elegant complex of a monumental cenotaph - one of Lutyens' most ambitious - with stone flags and the Stone of Remembrance;
* Group value: with the adjacent Town Hall (Grade I-listed), Post Office, and lamp posts (Grade II-listed).