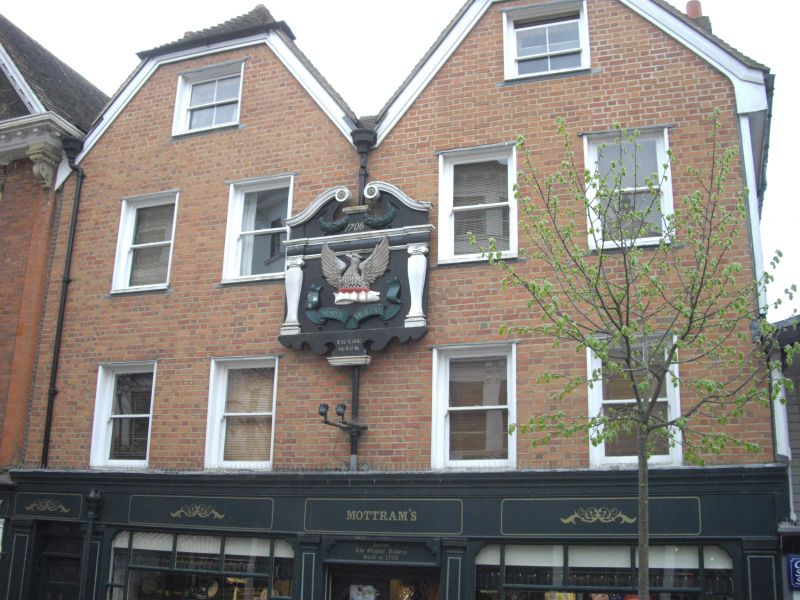 shall be upgraded to Grade II* (star) and the description shall read:-

Hotel, later shop with accommodation above. Built in 1706 as the Gloster Tavern, one of the first and probably the grandest purpose-built hotel in Tunbridge Wells of the early period, with alterations of early and late C19. Two parallel ranges, built of brick but original front elevation tile-hung with half-hipped old tiled roofs with 2 brick stacks. Wooden moulded eaves cornice. Three storeys and attics; irregular fenestration. South west front, originally front elevation, retains 3 sash windows of the original 5 shown in Kip's engraving of 1718 or 1719. The tops of the other two are visible but these were blocked in during the early C19 when a further chimneystack was inserted. Windows have moulded architraves but no glazing bars. Two late C19 flat-roofed dormers. Late C19 brown brick projection to ground floor. North west elevation has 2 sashes with vertical glazing bars to attic and 4 windows without glazing bars to lower floors. Ground floor has late C19 shopfront with pilasters and deep fascia. Central double doors to shop and left side doorcase to upper floors. South east elevation has sash with verticals only to attic, one 16-pane sash to second floor and two 12-pane sashes to first floor. Ground floor had entrance and 2 windows boarded over at time of inspection. Windows appeared to be sashes with glazing bars. The principal interior feature is a very fine staircase of c1706 which has two flights at right angles from ground to first floor with two turned balusters to each step, scrolled tread ends and column newels. The staircase changes in character from the second floor to the attic, the dogleg arrangement becoming a well and there is a straight flight of thicker balusters. First floor rooms retain old floorboards and some two panelled doors, but were refurbished in the late C19 with florid panelling with dados having panels of quatrefoils or anthemions, doors with linenfold panelling and fireplaces with pilasters and tiled surrounds. Second floor south east room retains an C18 moulded cornice, visible corner posts and a panelled cupboard with 2 panelled door. The adjoining room has a similar moulded cornice, exposed beam with 3 inch chamfer and C19 basket grate. Further chamfered beams and 2 panelled doors. Attic retains original roof timbers with pegged rafters and some plank doors, one with wooden latch and pintle hinges. A particularly interesting feature is the original link between the two ranges at attic level, shown as a small hip in Kip's engraving of
c1718. This was to provide staircase access to the front range of attics. Kip's engraving of c1718 indicates that there was originally an internal walkway on the north west side, echoing the colonnade on the other side of the Pantiles.