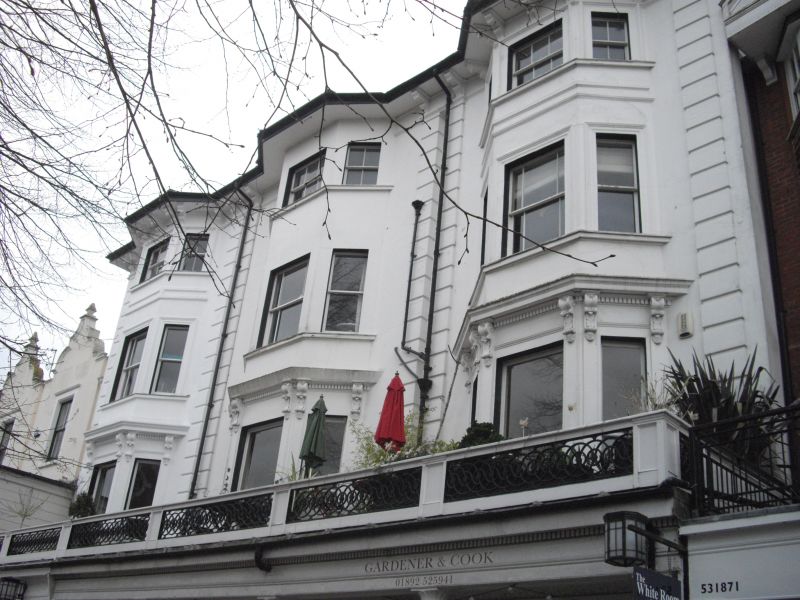 THE PANTILES
1.
1746
(North West Side)
Nos 38 to 46 (even)
TQ 5838 NW 1/297 20.5.52
II GV
2.
The site of the present Nos 40-46 The Pantiles was previously occupied by the
Assembly and Great Gaming rooms, presided over by Beau Nash who was Master of
Ceremonies from 1735-176l. The present building is Mid C19. Nos 38-44 are 4
storeys stuccoed. Wide bracket cornice. 3 3-light canted bays with some glazing
bars intact flanked by rusticated pilasters. Cast iron and stone balcony on
the lst floor. Later C19 shop fronts. No 46 has ground and lst floors of the
late C18 to early C19 of wood grooved in imitation of masonry. The 2nd floor,
which is set back, is later C19 having 2 curved gables and 2 sashes with verticals
only and hood moulding over. The lst floor has 3 sashes with glazing bars intact
and 3 wrought iron balconettes. Central doorcase with 6 panelled door and moulded
surround. Colonnade of l0 columns with foliated capitals which probably remains
from the C18 building.
Nos 2 to 28 (even) and Nos 38 to 72 (even) form a group.