The Church of King Charles the Martyr

A Grade I Listed Building in Royal Tunbridge Wells, Kent 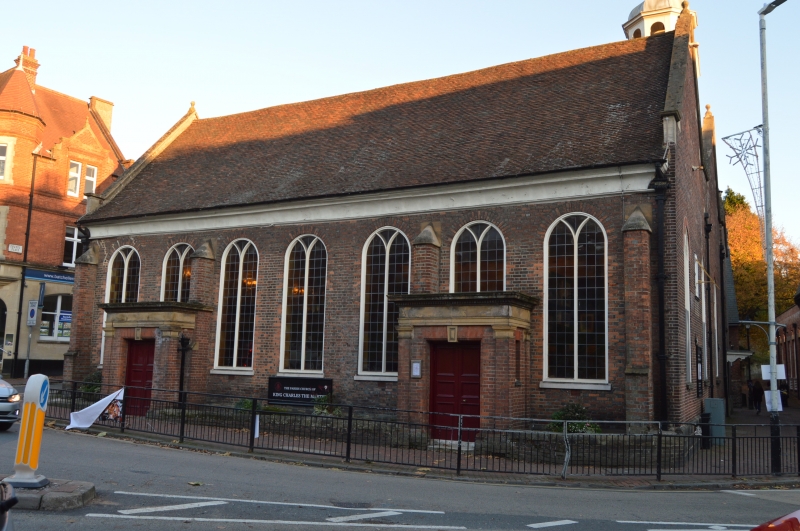 Entry Name: The Church of King Charles the Martyr

Church. On a corner site at one end of the Pantiles, close to the well at Tunbridge Wells with which the church has been intimately connected. 1676-1684, builder Mr Green. The original design was lengthened to (present ritual) N in 1679-80. Both phases have ornamental plaster ceilings. The existing ritual N was then the ritual E end. In 1688-1696 the church was doubled in size with a matching parallel block to the W, producing a plan that was almost square. The builder for this work was Mr Waghorne. 1846 vestry, part of a schoolroom and vestry block. In 1882 Ewan Christian added a short chancel on the E side and the church was re-oriented. Christian also reinforced the church with steel.

MATERIALS: It is built of red brick with some blue headers, tiled roofs.

EXTERIOR: The ritual W end has buttresses with set offs and is roofed N/S with sprocketted eaves above a deep cornice. Pair of matching brick porches with corner pilasters, stone cornices and rubbed brick flat arches to the outer doorways. 7 tall windows with Y glazing bars. S side has 2 gables and three similar windows. Off the S end of the rear gabled roof is a clock turret with cupola. This has a square-on-plan weather-boarded base, the cupola with a domed lead roof with finial and weathervane. The clock is 1760 (mechanism still in situ, but clock worked by 1998 mechanism), minute hand added 1799. S doorway into vestry has a flat porch hood on curly timber brackets. The chancel is gabled to the E with a large round headed window, flanked by the vestry and organ chamber blocks, roofed at right angles to the chancel. The organ chamber block has a canted NE corner and a doorway into the vestry with a flat porch hood on curly timber brackets.

INTERIOR: The interior has a segmental-headed 1882 chancel arch supported on classical columns flanked by narrow bays with matching pilasters and an entablature. The columns match those of the 1688-96 phase that mark the former W wall of the original church. Spectacular plasterwork of the highest quality by craftsmen who had worked for Sir Christopher Wren. The E half of the nave is by John Wetherell a design of shallow domes and roundels, enriched with husk ornament, festoons of fruit, cherubs' heads and palms. Wetherell was paid in 1681. The N bay of the design is a deeper octagon, formerly above the first phase sanctuary. Wetherell designed this but it was executed by Henry Doogood. Doogood also executed the plasterwork now in the W half of the nave when the church was enlarged, employing a matching design in 1690-96 but interpreting it 'with more bravura' (Pevsner).

Grey and white paving. N and S galleries on turned timber posts, their fronts with fielded panels, date from the 2nd phase but amended c.1900 with tiered seating. C17 chapel benches, a real rarity, survive both in the galleries and parts of the nave. The seats and arm rests are supported on turned standards. Some have late Victorian glove rests and Jonas Hanway umbrella stands attached. Benches in the two centre blocks of the nave were installed in 1912, the design making some reference to their C17 predecessors. Chancel woodwork incorporates pedimented panels with the Lord's Prayer and Creed in richly carved limewood frames by William Cheere, originating from the demolished church of All Hallows, Bread Street, in the City of London. 1906 white marble font with an octagonal bowl decorated with festoons of fruit and winged cherubs' heads, on marble columns with carved capitals. 1901 E window by Heaton, Butler and Bayne. 1969 plain glazing, sympathetic to the building in the nave.

HISTORY: The church was originally built as a chapel to serve the people gathering at Tunbridge Wells to drink the water, and as such was one of the first permanent buildings constructed on the site. Thomas Neale, who began the commercial development of the town was also involved in the construction of the church. As the town grew up around it the church was extended to cope with the growing numbers of town dwellers and spa visitors. It became a parish church in 1889.

The development of the fabric of the church has been thoroughly researched and is very well-documented, as is the major role it and its patrons played in the development of Tunbridge Wells as a fashionable spa. Contemporary lists of contributors and disbursements are framed in the church.

SUMMARY OF IMPORTANCE: The Church of King Charles the Martyr is of outstanding historic importance to the history of Tunbridge Wells, and architecturally remarkable for its two phases of late C17 plasterwork of the highest quality, survival of C17 galleries and some original seating. The 1882 addition and alterations by Ewan Christian were sympathetic to the C17 original.