Group of 35 17TH to 18TH Century Monuments in the Churchyard of the Church of All Saints, West of the Path to Church Cottage As Far As the Henry Baldwin Monument 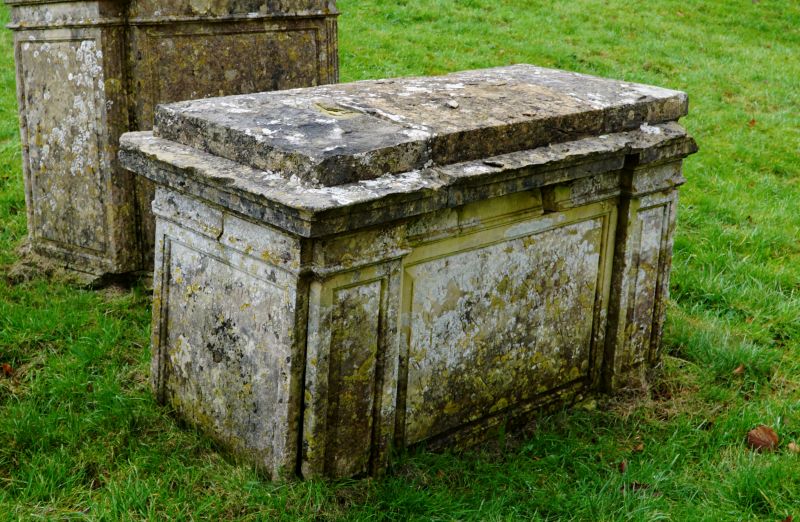 Entry Name: Group of 35 17TH to 18TH Century Monuments in the Churchyard of the Church of All Saints, West of the Path to Church Cottage As Far As the Henry Baldwin Monument

Group of 5 chest tombs and 30 headstones (some associated with flat
stone slabs and footstones). Limestone.
a) Chest tomb with lyre-shaped ends, c3m south of the porch to
William Cherington, died 1696 and Sarah Cherington, died 1760.
Moulded plinth with oval inscription panel to William
Cherington surrounded by finely executed foliate scrollwork on
the north side; foliate decoration to the sides of the lyre-
shaped ends. Plain rectangular inscription panel to Sarah
Cherington on the south side flanked by rectangular slabs
decorated with representations of circular vases of flowers in
relief; foliate decoration to the sides of the lyre-shaped
ends. Cherub's head above a small cartouche at the east end;
two cornucopias below the cartouche. Cherub's head and
cartouche at the west end. Thick capping with moulded margin.

Three flat stone slabs one with headstone and footstone, one
with a headstone immediately to the south of the last.

b) Chest tomb to Richard Jordan, died 1669 immediately to the
south of the flat stone slabs. Flat-chamfered plinth;
illegible inscription panel on the north side. Inscription to
Richard Jordan on the south side. Thick capping with flat-
chamfered margin.

Thirty late C17-early, mid and late C18 headstones, between the
last and the Henry Baldwin chest tomb (q.v.). The late C17-
early C18 headstones tend to be of simple design e.g. pair of
segmental-headed headstones c3m west of the Stephens family
chest tomb which are c0.5m in height. Left-hand headstone to
Joseph, son of Thomas Kilby, with date 1695. Right-hand
headstone dated 1703, both have simple sunken inscription
panels with almost flat double scrolls at the top.

The mid C18 headstones vary in size but tend to be more ornate
and include cherub's heads, hanging drapery; open bible, skull;
winged skull and hourglass and floral motifs, e.g. the pair of
headstones c0.5m south-west of the Stephens family chest tomb
(q.v.). Left-hand headstone tb Mary ----, including date 1730;
top of stone comprises a cherub's head holding an open bible;
festoon below the bible; hanging drapery and fruit and flowers
either side of the inscription panel. Right-hand headstone
with an illegible oval inscription panel with a raised foliate
margin, carved head holding a skull at the top flanked by
cornucopias and hanging drapery. The motifs decorating these
monuments are carved to give an almost 3-dimensional quality
unlike the motifs decorating the late C18 headstones in the
group.

The late C18 headstones vary less in their size and decoration
having cherub's heads at the top and inscription panels with
cartouche-like surrounds.

Chest tomb and pedestal tomb at the western edge of the group
of monuments:-

d) Chest tomb to Henry, son of Henry and Eleanor Baldwin,
died 1756 and other members of their family. Fielded
inscription panel flanked by fielded marginal panels on the
north side. Fielded inscription panels at the ends. Capping
stone with moulded margin and a rectangular upper capping
stone.

e) Pedestal monument to Ann, wife of John Blake c0.5m to the south
of the latter. Moulded plinth with inset corners; fielded
inscription panels set back either side; similar but unused
inscription panels on the other three sides. Moulded and
stepped pyramidal capping. (Capping in a poor state of repair
at the time of resurvey - November 1986).
(Rev.d A.J.C. Turner, Record of Monuments dating from before 1850
in the Churchyard of the Church of All Saints, North Cerney, 1971).