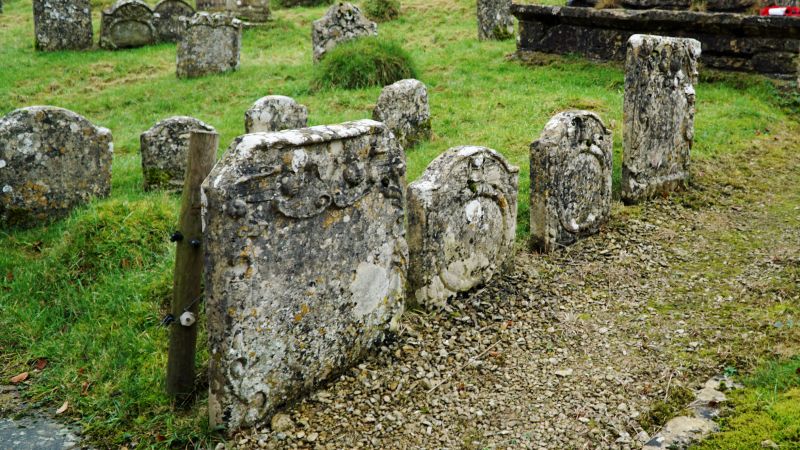 Entry Name: Group of Monuments in the Church Yard of the Church of All Saints East of the Path to Church Cottage As Far As the Thomas Radway Monument

Group of 15 headstones. Late C17 - late C18. Limestone. From
west to east:-
a) Row of four headstones (facing west) set along the east side of
the path to Church Cottage. Two late C18 headstones with
partially legible inscriptions with cartouche-like surrounds
flanking two matching smaller possibly mid C17 headstones with
shouldered segmental tops and partially legible inscriptions
within raised circular borders with bellflower decoration;
foliate spandrel outside the raised margin; winged hourglass
motifs at the top.
b) Row of four headstones (3 facing east) c2m to the east of the
preceding monument. Three of these are of the same design as
the two mid C17 headstones described above, one is dated and
initialled 'H.C. 1734' another 1761. Simple small headstone at
the southern end of the row with canted head and sunken
inscription plaque initialled 'M.H. 1728'.
c) Single headstone, c2.5m to the east of the preceding row of
monuments, dated 1774 matches the three mid C18 headstones in
the former row with raised oval margin to the inscription panel
and hourglass motif at the top.
d) Two mid-late C18 headstones (one behind the other) c2.5m south
of the preceding row of monuments: one with cartouche-like
surround to the inscription; one with double inscription panel
and double scroll at the top.
e) Row of 4 headstones north of the Thomas Radway chest tomb.
From north to south: C18 headstone, set slightly forwards away
from the others with partially legible inscription with
cartouche-like surround and single cherub's head at the top.
Similar headstone to the right. Mid C17 headstone with
shouldered segmental head and an almost illegible inscription
panel with raised margin and foliate decoration. 3-petal
flowers in the lower spandrels; foliate scrollwork in the upper
spandrels; hourglass motif at the top flanked by foliate
decoration. Almost recumbent headstone to the right, of
similar design but with a rectangular inscription panel flanked
by swags and with a winged hourglass at the top.
(Rev.d A.J.C. Turner, Record of Monuments dating from before 1850
in the Churchyard of the Church of All Saints, North Cerney, 1971).